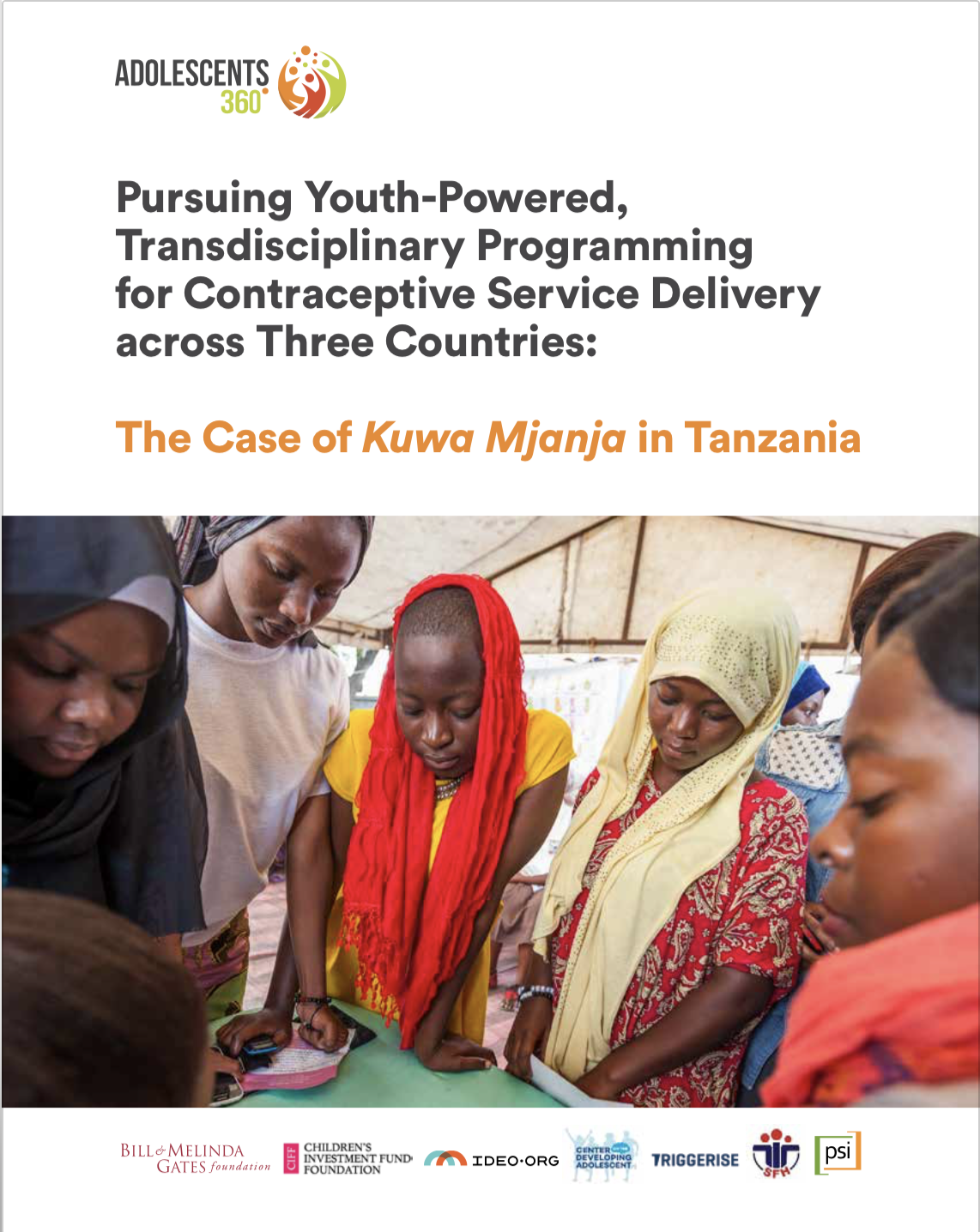 This technical brief analyzes A360’s strategy and lessons learned to date, presenting a case study of the A360 experience in Tanzania, and offering considerations for similar AYSRH implementation in future settings. 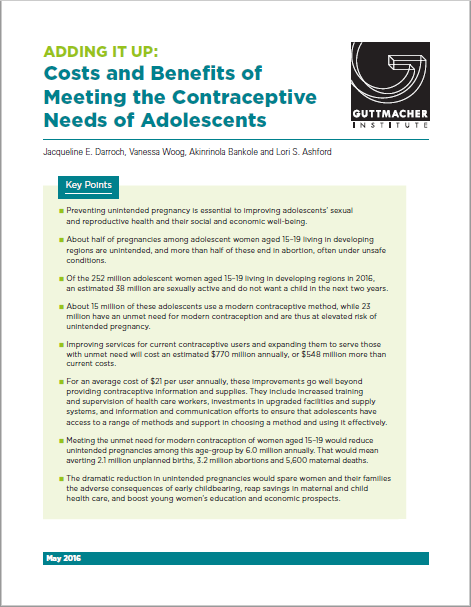 ADDING IT UP: Costs and Benefits of Meeting the Contraceptive Needs of Adolescents

■ Preventing unintended pregnancy is essential to improving adolescents’ sexual and reproductive health and their social and economic well-being.
■ About half of pregnancies among adolescent women aged 15–19 living in developing regions are unintended, and more than half of these end in abortion, often under unsafe conditions.
■ Of the 252 million adolescent women aged 15–19 living in developing regions in 2016, an estimated 38 million are sexually active and do not want a child in the next two years.
■ About 15 million of these adolescents use a modern contraceptive method, while 23 million have an unmet need for modern contraception and are thus at elevated risk of unintended pregnancy.
■ Improving services for current contraceptive users and expanding them to serve those with unmet need will cost an estimated $770 million annually, or $548 million more than current costs.
■ For an average cost of $21 per user annually, these improvements go well beyond providing contraceptive information and supplies. They include increased training
and supervision of health care workers, investments in upgraded facilities and supply systems, and information and communication efforts to ensure that adolescents have access to a range of methods and support in choosing a method and using it effectively.
■ Meeting the unmet need for modern contraception of women aged 15–19 would reduce unintended pregnancies among this age-group by 6.0 million annually. That would mean averting 2.1 million unplanned births, 3.2 million abortions and 5,600 maternal deaths.
■ The dramatic reduction in unintended pregnancies would spare women and their families the adverse consequences of early childbearing, reap savings in maternal and child health care, and boost young women’s education and economic prospects. 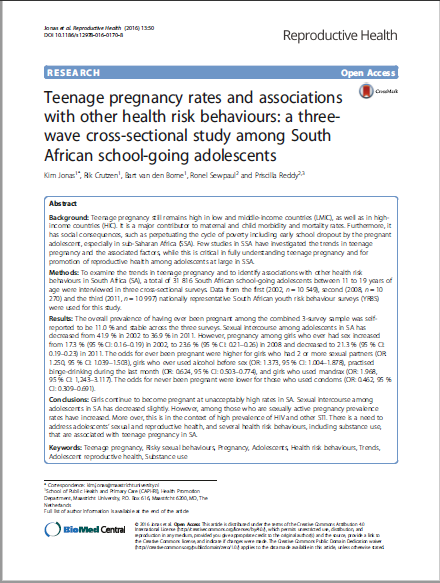 Background: Teenage pregnancy still remains high in low and middle-income countries (LMIC), as well as in high-income countries (HIC). It is a major contributor to maternal and child morbidity and mortality rates. Furthermore, it has social consequences, such as perpetuating the cycle of poverty including early school dropout by the pregnant adolescent, especially in sub-Saharan Africa (SSA). Few studies in SSA have investigated the trends in teenage pregnancy and the associated factors, while this is critical in fully understanding teenage pregnancy and for promotion of reproductive health among adolescents at large in SSA.
Methods: To examine the trends in teenage pregnancy and to identify associations with other health risk behaviours in South Africa (SA), a total of 31 816 South African school-going adolescents between 11 to 19 years of age were interviewed in three cross-sectional surveys. Data from the first (2002, n = 10 549), second (2008, n =10 270) and the third (2011, n = 10 997) nationally representative South African youth risk behaviour surveys (YRBS) were used for this study.
Results: The overall prevalence of having ever been pregnant among the combined 3-survey sample was self-reported to be 11.0 % and stable across the three surveys. Sexual intercourse among adolescents in SA has decreased from 41.9 % in 2002 to 36.9 % in 2011. However, pregnancy among girls who ever had sex increased from 17.3 % (95 % CI: 0.16–0.19) in 2002, to 23.6 % (95 % CI: 0.21–0.26) in 2008 and decreased to 21.3 % (95 % CI: 0.19–0.23) in 2011. The odds for ever been pregnant were higher for girls who had 2 or more sexual partners (OR: 1.250, 95 % CI: 1.039–1.503), girls who ever used alcohol before sex (OR: 1.373, 95 % CI: 1.004–1.878), practised binge-drinking during the last month (OR: 0.624, 95 % CI: 0.503–0.774), and girls who used mandrax (OR: 1.968,
95 % CI: 1,243–3.117). The odds for never been pregnant were lower for those who used condoms (OR: 0.462, 95 %CI: 0.309–0.691).
Conclusions: Girls continue to become pregnant at unacceptably high rates in SA. Sexual intercourse among adolescents in SA has decreased slightly. However, among those who are sexually active pregnancy prevalence rates have increased. More over, this is in the context of high prevalence of HIV and other STI. There is a need to address adolescents’ sexual and reproductive health, and several health risk behaviours, including substance use, that are associated with teenage pregnancy in SA. 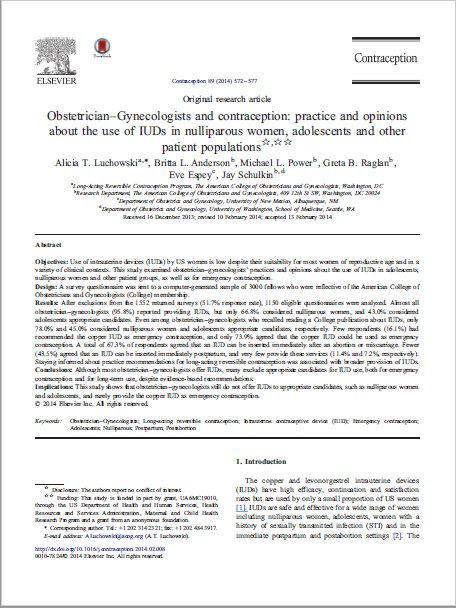 Obstetrician–Gynecologists and contraception: practice and opinions about the use of IUDs in nulliparous women, adolescents and other patient populations 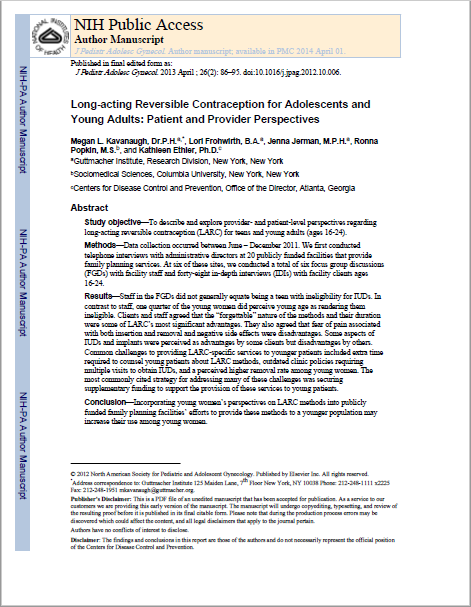 Study objective—To describe and explore provider- and patient-level perspectives regarding long-acting reversible contraception (LARC) for teens and young adults (ages 16-24).
Methods—Data collection occurred between June – December 2011. We first conducted telephone interviews with administrative directors at 20 publicly funded facilities that provide family planning services. At six of these sites, we conducted a total of six focus group discussions (FGDs) with facility staff and forty-eight in-depth interviews (IDIs) with facility clients ages 16-24.
Results—Staff in the FGDs did not generally equate being a teen with ineligibility for IUDs. In contrast to staff, one quarter of the young women did perceive young age as rendering them ineligible. Clients and staff agreed that the “forgettable” nature of the methods and their duration were some of LARC’s most significant advantages. They also agreed that fear of pain associated with both insertion and removal and negative side effects were disadvantages. Some aspects of IUDs and implants were perceived as advantages by some clients but disadvantages by others. Common challenges to providing LARC-specific services to younger patients included extra time required to counsel young patients about LARC methods, outdated clinic policies requiring multiple visits to obtain IUDs, and a perceived higher removal rate among young women. The most commonly cited strategy for addressing many of these challenges was securing supplementary funding to support the provision of these services to young patients.
Conclusion—Incorporating young women’s perspectives on LARC methods into publicly funded family planning facilities’ efforts to provide these methods to a younger population may increase their use among young women.