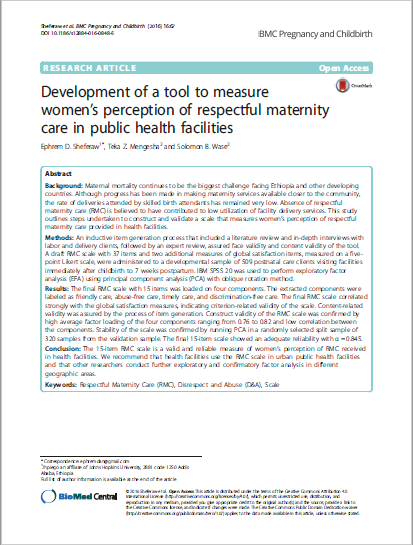 Background: Maternal mortality continues to be the biggest challenge facing Ethiopia and other developing countries. Although progress has been made in making maternity services available closer to the community, the rate of deliveries attended by skilled birth attendants has remained very low. Absence of respectful maternity care (RMC) is believed to have contributed to low utilization of facility delivery services. This study outlines steps undertaken to construct and validate a scale that measures women’s perception of respectful maternity care provided in health facilities.
Methods: An inductive item generation process that included a literature review and in-depth interviews with labor and delivery clients, followed by an expert review, assured face validity and content validity of the tool. A draft RMC scale with 37 items and two additional measures of global satisfaction items, measured on a five-point Likert scale, were administered to a developmental sample of 509 postnatal care clients visiting facilities immediately after childbirth to 7 weeks postpartum. IBM SPSS 20 was used to perform exploratory factor analysis (EFA) using principal component analysis (PCA) with oblique rotation method.
Results: The final RMC scale with 15 items was loaded on four components. The extracted components were labeled as friendly care, abuse-free care, timely care, and discrimination-free care. The final RMC scale correlated strongly with the global satisfaction measures, indicating criterion-related validity of the scale. Content-related validity was assured by the process of item generation. Construct validity of the RMC scale was confirmed by high average factor loading of the four components ranging from 0.76 to 0.82 and low correlation between the components. Stability of the scale was confirmed by running PCA in a randomly selected split sample of 320 samples from the validation sample. The final 15-item scale showed an adequate reliability with α = 0.845.
Conclusion: The 15-item RMC scale is a valid and reliable measure of women’s perception of RMC received in health facilities. We recommend that health facilities use the RMC scale in urban public health facilities and that other researchers conduct further exploratory and confirmatory factor analysis in different geographic areas. 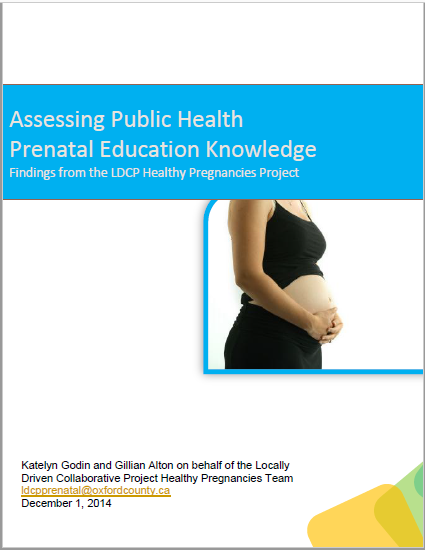 Prenatal education programs are universally available in Canada. They are attended by about one-third of women and two-thirds of first-time mothers. Prenatal programs offer a range of educational and supportive measures to build capacity in expectant parents.  Traditionally, prenatal programs were provided to prepare for birth in the hospital environment and learn about pain management during labour. However, program objectives have evolved considerably and now strive to influence a range of issues, including improving health behaviour, increasing women’s confidence regarding pregnancy management and birth, preparing women and their partners for childbirth and parenthood, and contributing to the reduction of perinatal morbidity and mortality. 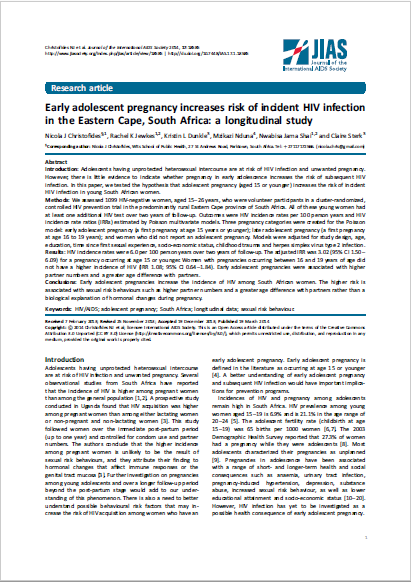 Introduction: Adolescents having unprotected heterosexual intercourse are at risk of HIV infection and unwanted pregnancy. However, there is little evidence to indicate whether pregnancy in early adolescence increases the risk of subsequent HIV infection. In this paper, we tested the hypothesis that adolescent pregnancy (aged 15 or younger) increases the risk of incident HIV infection in young South African women.
Methods: We assessed 1099 HIV-negative women, aged 15-26 years, who were volunteer participants in a cluster-randomized, controlled HIV prevention trial in the predominantly rural Eastern Cape province of South Africa. All of these young women had at least one additional HIV test over two years of follow-up. Outcomes were HIV incidence rates per 100 person years and HIV incidence rate ratios (IRRs) estimated by Poisson multivariate models. Three pregnancy categories were created for the Poisson model: early adolescent pregnancy (a first pregnancy at age 15 years or younger); later adolescent pregnancy (a first pregnancy at age 16 to 19 years); and women who did not report an adolescent pregnancy. Models were adjusted for study design, age, education, time since first sexual experience, socio-economic status, childhood trauma and herpes simplex virus type 2 infection. Results: HIV incidence rates were 6.0 per 100 person years over two years of follow-up. The adjusted IRR was 3.02 (95% CI 1.50-6.09) for a pregnancy occurring at age 15 or younger. Women with pregnancies occurring between 16 and 19 years of age did not have a higher incidence of HIV (IRR 1.08; 95% CI 0.64-1.84). Early adolescent pregnancies were associated with higher partner numbers and a greater age difference with partners.
Conclusions: Early adolescent pregnancies increase the incidence of HIV among South African women. The higher risk is associated with sexual risk behaviours such as higher partner numbers and a greater age difference with partners rather than a biological explanation of hormonal changes during pregnancy. 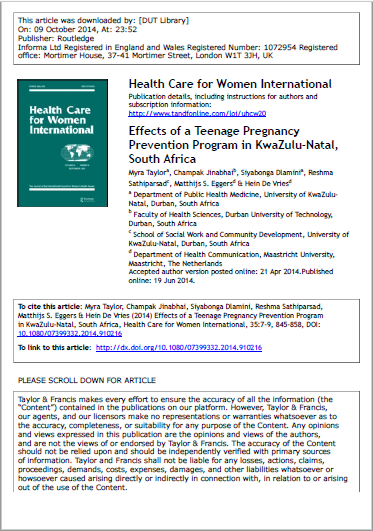 TP has several detrimental effects such as increased chances of dropping out of school and increased risk of sexually transmitted infections (STIs), preterm birth, mental health problems, and economic family burden (Kanku & Mash, 2010). A South African review reported a pregnancy rate of 71 per 1000 women (15–19 years; Panday, Makiwane, Ranchod, & Lestoala, 2009). The need for barrier methods to prevent transmission of HIV and other STIs emphasizes the need for male involvement (Harrison, Newell, Imrie, & Hoddinott, 2010), and the importance of targeting both sexes to promote abstinence or consistent condom use. Many scholars have also reported lack of gender equity and the urgent need to address gender norms in a society of male privilege, despite South Africa’s Bill of Rights (Jewkes, Vundule, Maforah, & Jordaan, 2001; Sathiparsad & Taylor, 2011; Wood, Maforah, & Jewkes, 1998). School settings are ideal places to effectively reach teens to motivate them to engage in TP prevention behaviors (Bennett & Asseﬁ, 2005; DiCenso, Guyatt, Willan, & Grifﬁth, 2002; Kirby, 2011).
Researchers employed a Cochrane systematic review of educational interventions to prevent unintended pregnancies amongst youth, 27 of which were undertaken at schools, and found that multicomponent interven-tions combining educational and contraceptive interventions were success-ful (Oringanje, Meremikwu, Eko, Esu, & Meremikwu, 2009). The literature also includes a report of the beneﬁts of improving knowledge, changing beliefs and attitudes, and increasing the intentions of teens to protect them-selves, either through sexual abstinence or by using contraception (Kirby, 2011). South Africa has progressive social and health policies that permit young women from the age of 12 to independently decide on contracep-tion and abortion, and these services should be free and available at local health facilities (Department of Health, 2012a). 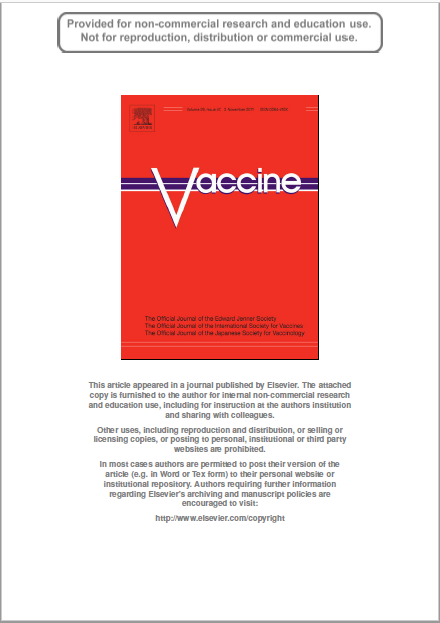 In South Africa, cervical cancer is the second leading cause of death among women. Black South Africa women are disproportionately affected by cervical cancer and have one of the highest mortality rates from this disease. Although the body of literature that examines HPV and cervical cancer prevention is growing in the developing world; there is still a need for a better understanding of women’s knowledge and beliefs around HPV and cervical cancer prevention. Therefore, this formative study sought to examine women’s attitudes, beliefs and knowledge of HPV and cervical cancer, HPV vaccine acceptance, maternal-child communication about sexuality, and healthcare decision-making and gender roles within an urban community in South Africa.
Women ages 18–44 were recruited from an antenatal clinic in a Black township outside of Johan-nesburg during the fall of 2008. Twenty-four women participated in three focus groups. Findings indicated that the women talked to their children about a variety of sexual health issues; had lim-ited knowledge about HPV, cervical cancer, and the HPV vaccine. Women were interested in learning more about the vaccine although they had reservations about the long-term affect; they reinforced that grandmothers played a key role in a mother’s decisions’ about her child’s health, and supported the idea that government should provide the HPV vaccine as part of the country’s immunization program.
Our ﬁndings indicate the need to develop primary prevention strategies and materials that will pro-vide women with basic cervical cancer prevention messages, including information about HPV, cervical cancer, the HPV vaccine, screening, and how to talk to their children about these topics. Prevention strategies should also consider the cultural context and the role that grandmothers play in the family unit.