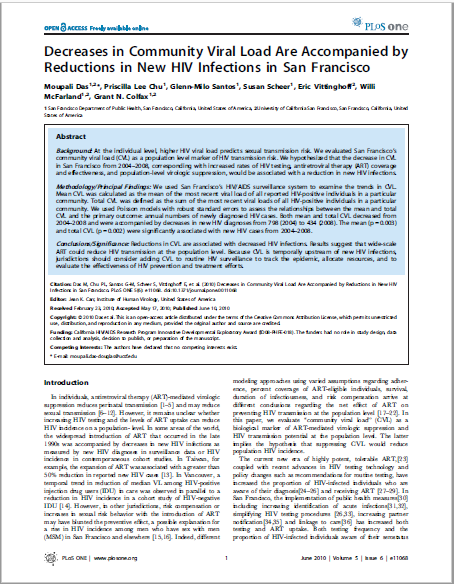 Background: At the individual level, higher HIV viral load predicts sexual transmission risk. We evaluated San Francisco’s community viral load (CVL) as a population level marker of HIV transmission risk. We hypothesized that the decrease in CVL in San Francisco from 2004–2008, corresponding with increased rates of HIV testing, antiretroviral therapy (ART) coverage and effectiveness, and population-level virologic suppression, would be associated with a reduction in new HIV infections.
Methodology/Principal Findings: We used San Francisco’s HIV/AIDS surveillance system to examine the trends in CVL. Mean CVL was calculated as the mean of the most recent viral load of all reported HIV-positive individuals in a particular community. Total CVL was defined as the sum of the most recent viral loads of all HIV-positive individuals in a particular community. We used Poisson models with robust standard errors to assess the relationships between the mean and total CVL and the primary outcome: annual numbers of newly diagnosed HIV cases. Both mean and total CVL decreased from 2004–2008 and were accompanied by decreases in new HIV diagnoses from 798 (2004) to 434 (2008). The mean (p = 0.003) and total CVL (p = 0.002) were significantly associated with new HIV cases from 2004–2008.
Conclusions/Significance: Reductions in CVL are associated with decreased HIV infections. Results suggest that wide-scale ART could reduce HIV transmission at the population level. Because CVL is temporally upstream of new HIV infections, jurisdictions should consider adding CVL to routine HIV surveillance to track the epidemic, allocate resources, and to evaluate the effectiveness of HIV prevention and treatment efforts. 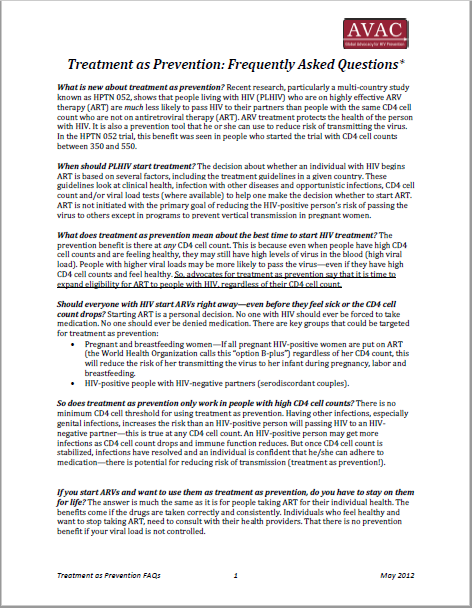 This FAQ was developed with input from the National Empowerment Network of People Living with HIV (NEPHAK) and Health GAP on the basis of national PLHIV dialogues on treatment as prevention conducted throughout Kenya. The questions and answers contain information relevant or a global audience—but have been written specifically for individuals living and working in low and middle income countries.  For more on treatment and prevention and other HIV prevention options in research and rollout visit www.avac.org. 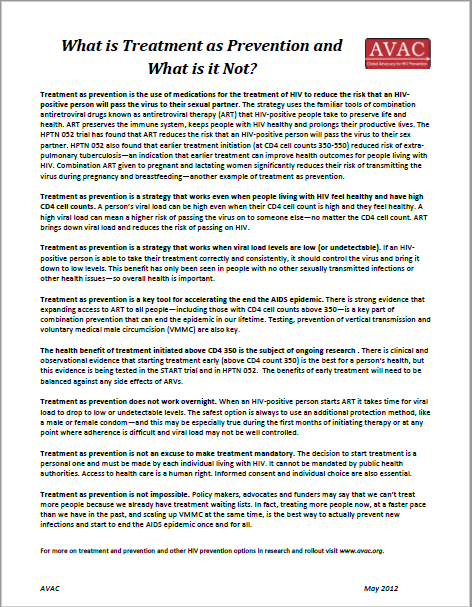 What is Treatment as Prevention and What is it Not?

Strengthening HIV surveillance in the antiretroviral therapy era: rationale and design of a longitudinal study to monitor HIV prevalence and incidence in the uMgungundlovu District, KwaZulu-Natal, South Africa

Background:  South Africa has over 6,000,000 HIV infected individuals and the province of KwaZulu-Natal (KZN) is the most severely affected. As public health initiatives to better control the HIV epidemic are implemented, timely, detailed and robust surveillance data are needed to monitor, evaluate and inform the programmatic interventions and policies over time. We describe the rationale and design of the HIV Incidence Provincial Surveillance System (HIPSS) to monitor HIV prevalence and incidence.

Methods/Design:  The household-based survey will include a sample of men and women from two sub-districts of the uMgungundlovu municipality (Vulindlela and the Greater Edendale) of KZN, South Africa. The study is designed as two sequential cross-sectional surveys of 10,000 randomly selected individuals aged 15–49 years to be conducted one year apart. From the cross sectional surveys, two sequential cohorts of HIV negative individuals aged 15–35 years will be followed-up one year later to measure the primary outcome of HIV incidence. Secondary outcomes include the laboratory measurements for pulmonary tuberculosis, sexually transmitted infections and evaluating tests for estimating population-level HIV incidence.

Antiretroviral therapy (ART) access, HIV-1 RNA viral load, and CD4 cell counts in HIV positive individuals will assess the effectiveness of the HIV treatment cascade. Household and individual-level socio-demographic characteristics, exposure to HIV programmatic interventions and risk behaviours will be assessed as predictors of HIV incidence. The incidence rate ratio of the two cohorts will be calculated to quantify the change in HIV incidence between consecutive samples. In anticipation of better availability of population-level HIV prevention and treatment programmes leading to decreases in HIV incidence, the sample size provides 84 % power to detect a reduction of 30 % in the HIV incidence rate between surveys.

Discussion:  The results from HIPSS will provide critical data regarding HIV prevalence and incidence in this community and will establish whether HIV prevention and treatment efforts in a “real world”, non-trial setting have an impact on HIV incidence at a population level. Importantly, the study design and methods will inform future methods for HIV surveillance.