Do behavioural differences help to explain variations in HIV prevalence in adolescents in sub-Saharan Africa? 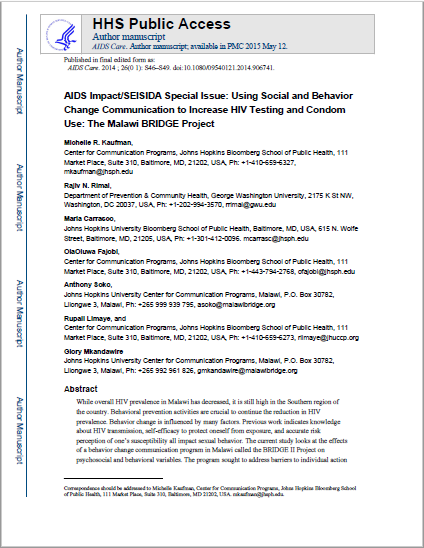 While overall HIV prevalence in Malawi has decreased, it is still high in the Southern region of the country. Behavioral prevention activities are crucial to continue the reduction in HIV prevalence. Behavior change is influenced by many factors. Previous work indicates knowledge about HIV transmission, self-efficacy to protect oneself from exposure, and accurate risk perception of one’s susceptibility all impact sexual behavior. The current study looks at the effects of a behavior change communication program in Malawi called the BRIDGE II Project on psychosocial and behavioral variables. The program sought to address barriers to individual action and confront societal norms related to sexual risk behavior through a mix of community-based activities and mass media messages delivered through local radio stations. Using cohort data (n = 594), we examined the effect of BRIDGE exposure on three variables that affect HIV behaviors: knowledge, self-efficacy, and risk perception, as well as two behavioral outcomes: HIV testing and condom use at last sex. Data were collected at baseline and for a midterm evaluation. Regression analyses showed exposure to BRIDGE was significantly associated with knowledge level (β = 0.20, p < .001) and self-efficacy (β = 0.35, p < .001) at midterm when controlling for baseline scores, but not risk perception. Psychosocial variables did not show a significant relationship to either behavioral outcome. However, program exposure was a significant predictor of both HIV testing in the past year (OR = 1.40, p < .001) and condom use at last sex (OR = 1.26, p < .05). This study suggests such a communication intervention may play an important role in not only affecting HIV-related behaviors themselves, but also critical factors that affect HIV behaviors, including knowledge and self-efficacy. It is recommended that communication efforts around HIV risk reduction be increased. 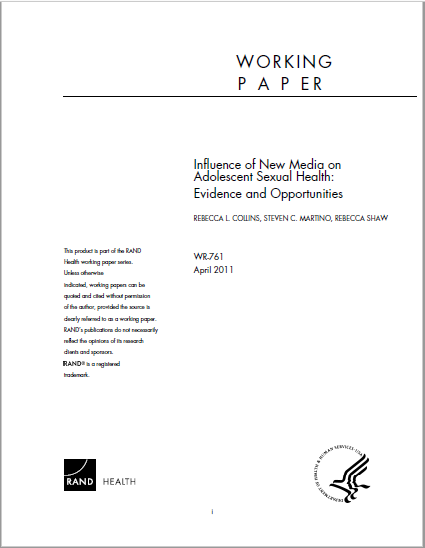 In this paper, we review the literature linking media use to adolescent sexual attitudes and behavior, focusing primarily on newer media. By “new media,” we mean content created and delivered via the Internet, including social networking and other specialized kinds of websites, as well as content delivered on other digital platforms, such as cell phones. We cover what may be largely unintended effects of exposure to sexual content in these media and review new-media interventions designed to improve adolescent sexual health. Our goal is both to clarify what is already known and to identify where there is the strongest need for further study in this rapidly changing area of adolescent life. 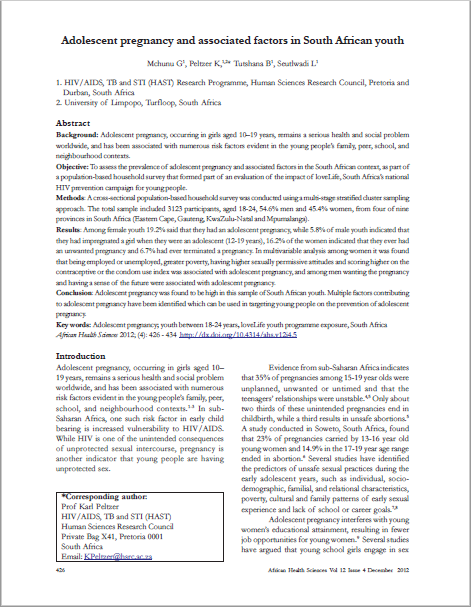 There is increasing focus on social and structural factors following the marginal success of individual-level strategies for HIV prevention. While there is evidence of decreased HIV prevalence among young individuals in South Africa, there is still a need to monitor HIV incidence and prevalence in this vulnerable group as well as track and prevent high-risk sexual behavior(s). This study investigated the social and structural factors that shape the context of vulnerability to increased risk of exposure to HIV infection. A mixed-methods approach including qualitative and quantitative design components was employed. Young adults in the age group 18-24 were interviewed from four provinces in South Africa. The qualitative results produced strong support for the effectiveness of loveLife’s HIV prevention programs. The household-based survey results showed that the strongest predictors of self-reported HIV infection (indicating a greater chance of being infected) using adjusted odds ratios (aOR) are: being diagnosed with an STI in a lifetime (aOR 13.68 95% Confidence Interval (CI) [4.61-40.56]; p < .001), inconsistent condom use (aOR 6.27 95% CI [2.08-18.84]; p < .01), and difficulty in accessing condoms (aOR 2.86 95% CI [1.04-7.88]; p < .05). The strongest predictors that indicated a decreased chance of being infected with the HI virus are: talking with partner about condom use in the past 12 months (aOR .08 95% CI [.02-.36]; p < .001) and having a grade 8 (aOR .04 95% CI [.01-.66]; p < .05) and higher educational level (aOR .04 95% CI [.01-.43]). These results show that social and structural factors serve as risk and protective factors for HIV prevention among young people. Intervention programs need to continue to focus on effective communication strategies and healthy relationships. Structural adjustments have to be made to encourage school attendance. Finally, social/health policies and health service delivery have to also be refined so that young people have access to youth friendly health services.

This paper aims to evaluate the impacts of four communication programs on promoting HIV testing behavior among sexually active individuals in South Africa. The four programs, implemented by Johns Hopkins Health and Education in South Africa, are aimed to promote HIV prevention behaviors, as well as gender-based violence prevention, tuberculosis screening and treatment, and reduction of alcohol consumption. Launched between 2009 and 2010, they all promoted HIV testing. Data came from the population-based Third National AIDS Communication Survey 2012; 6004 men and women who had sex within the last 12 months were included in the analysis. Multiple causal attribution analysis is used to justify causal reference and estimate the impact of communication programs. Findings indicate significant direct and indirect effects of the programs on HIV testing behavior. Indirect effects worked through increasing one’s likelihood of perceiving that their friends were tested and the probability of talking about HIV testing with sex partners and friends, which in turn increased the likelihood of HIV testing. Findings suggest multiple angles from which communication programs can promote HIV testing. The study also demonstrates the use of multiple statistical techniques for causal attribution in a post-only design, where randomization is not possible.