Transactional sex and risk for HIV infection in sub-Saharan Africa: a systematic review and meta-analysis

Young women aged 15 to 24 years in sub-Saharan Africa continue to be disproportionately affected by HIV. A growing number of studies have suggested that the practice of transactional sex may in part explain women’s heightened risk, but evidence on the association between transactional sex and HIV has not yet been synthesized. We set out to systematically review studies that assess the relationship between transactional sex and HIV among men and women in sub-Saharan Africa and to summarize the findings through a meta-analysis.

HIV prevalence among Ugandan youth aged 15–19 is esti-mated at 2.4%, with much higher rates estimated among vulnerable youth living in the slums, for both HIV and sexually transmitted infections (STIs) (37.2%). High-risk behaviors such as engaging in commercial sex work in addition to other HIV-related risk behaviors such as multiple sexual partners, intermittent condom use, and concurrent substance use all increase the risk of acquiring and transmit-ting HIV. 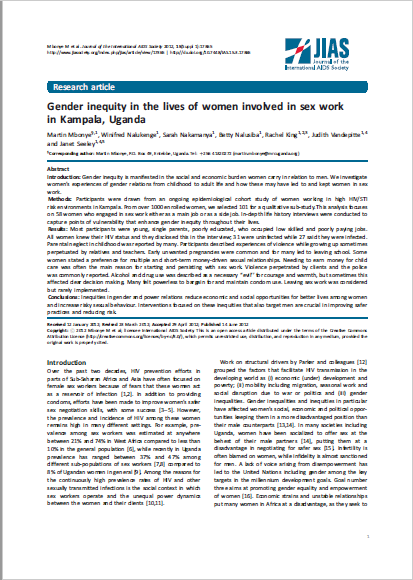 Gender inequity in the lives of women involved in sex work in Kampala, Uganda

Introduction: Gender inequity is manifested in the social and economic burden women carry in relation to men. We investigate women’s experiences of gender relations from childhood to adult life and how these may have led to and kept women in sex work.
Methods: Participants were drawn from an ongoing epidemiological cohort study of women working in high HIV/STI risk environments in Kampala. From over 1000 enrolled women, we selected 101 for a qualitative sub-study. This analysis focuses on 58 women who engaged in sex work either as a main job or as a side job. In-depth life history interviews were conducted to capture points of vulnerability that enhance gender inequity throughout their lives.
Results: Most participants were young, single parents, poorly educated, who occupied low skilled and poorly paying jobs. All women knew their HIV status and they disclosed this in the interview; 31 were uninfected while 27 said they were infected. Parental neglect in childhood was reported by many. Participants described experiences of violence while growing up sometimes perpetuated by relatives and teachers. Early unwanted pregnancies were common and for many led to leaving school. Some women stated a preference for multiple and short-term money-driven sexual relationships. Needing to earn money for child care was often the main reason for starting and persisting with sex work. Violence perpetrated by clients and the police was commonly reported. Alcohol and drug use was described as a necessary ‘‘evil’’ for courage and warmth, but sometimes this affected clear decision making. Many felt powerless to bargain for and maintain condom use. Leaving sex work was considered but rarely implemented.
Conclusions: Inequities in gender and power relations reduce economic and social opportunities for better lives among women and increase risky sexual behaviour. Interventions focused on these inequities that also target men are crucial in improving safer practices and reducing risk. 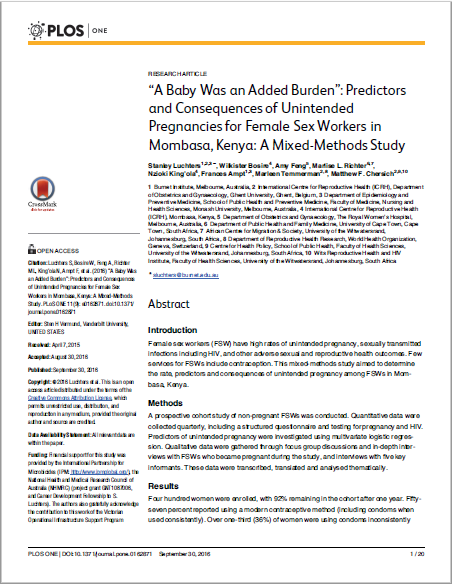 “A Baby Was an Added Burden”: Predictors and Consequences of Unintended Pregnancies for Female Sex Workers in Mombasa, Kenya: A Mixed-Methods Study

Introduction
Female sex workers (FSW) have high rates of unintended pregnancy, sexually transmitted infections including HIV, and other adverse sexual and reproductive health outcomes. Few
services for FSWs include contraception. This mixed-methods study aimed to determine the rate, predictors and consequences of unintended pregnancy among FSWs in Mombasa, Kenya.
Methods
A prospective cohort study of non-pregnant FSWs was conducted. Quantitative data were collected quarterly, including a structured questionnaire and testing for pregnancy and HIV. Predictors of unintended pregnancy were investigated using multivariate logistic regres-
sion. Qualitative data were gathered through focus group discussions and in-depth inter-views with FSWs who became pregnant during the study, and interviews with five key informants. These data were transcribed, translated and analysed thematically.
Results
Four hundred women were enrolled, with 92% remaining in the cohort after one year. Fifty-seven percent reported using a modern contraceptive method (including condoms when
used consistently). Over one-third (36%) of women were using condoms inconsistently without another method. Twenty-four percent had an unintended pregnancy during the study. Younger age, having an emotional partner and using traditional or no contraception, or condoms only, were independent predictors of unintended pregnancy. Women attributed pregnancy to forgetting to use contraception and being pressured not to by clients and emotional partners, as well as “bad luck”. They described numerous negative conse-quences of unintended pregnancy.
Conclusion
Modern contraceptive uptake is surprisingly low in this at-risk population, which in turn has a high rate of unintended pregnancy. The latter may result in financial hardship, social stigma, risk of abandonment, or dangerous abortion practices. FSWs face considerable barriers to the adoption of dual method contraceptive use, including low levels of control in their emotional and commercial relationships. Reproductive health services need to be incorporated into programs for sexually transmitted infections and HIV, which address the socially-determined barriers to contraceptive use. 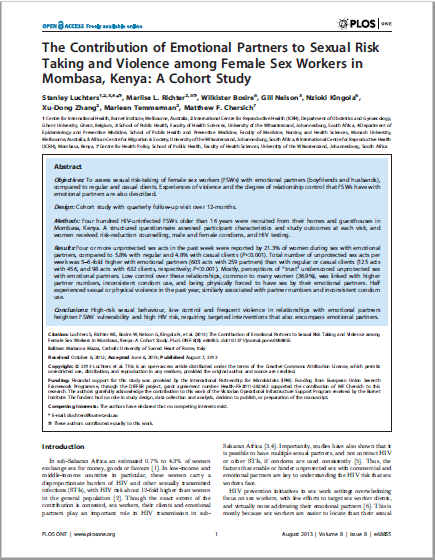 The Contribution of Emotional Partners to Sexual Risk Taking and Violence among Female Sex Workers in Mombasa, Kenya: A Cohort Study