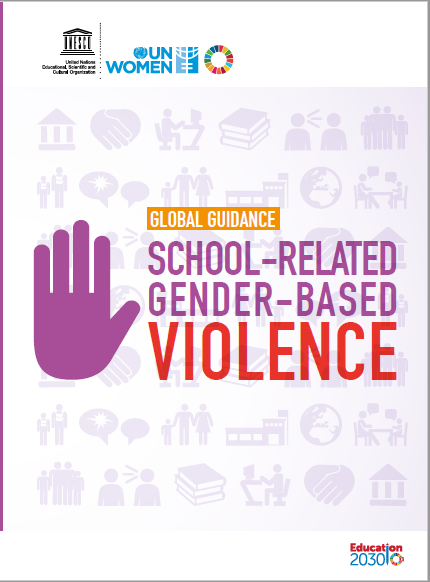 WHAT IS THE AIM OF THIS GUIDANCE? This guidance aims to provide a comprehensive, one-stop resource on school-related gender-based violence (SRGBV), including clear, knowledge-based operational guidance, diverse case studies drawn from examples of promising practice and recommended tools for the education sector and its partners working to eliminate gender-based violence. It distils programme knowledge based on existing global literature, promising practices, expert recommendations and practitioner consensus.
WHO IS THIS GUIDANCE FOR? The primary audience for this global guidance is the national education sector, including government policy-makers, education ministries, school administrators, educators and other school staff. The guidance may also have wider interest for other national and international stakeholders that are interested in addressing SRGBV, including NGOs, bilateral and multilateral agencies, teachers’ trade unions and policy-makers in other domestic sectors. The guidance is intended primarily for use in low- and middle-income settings, but is based on norms and principles that are universally applicable.
WHAT IS COVERED IN THIS GUIDANCE? Promising practice case studies and recommended tools are embedded throughout the relevant sub-sections of the guidance. These provide readers with illustrative examples of implementation in real-life contexts and can serve as resources that have been successfully used – and can be adapted – for application in different contexts.
This guidance complements other existing tools and materials for specific bilateral, multilateral and NGO audiences on violence against women and girls, and violence in schools. 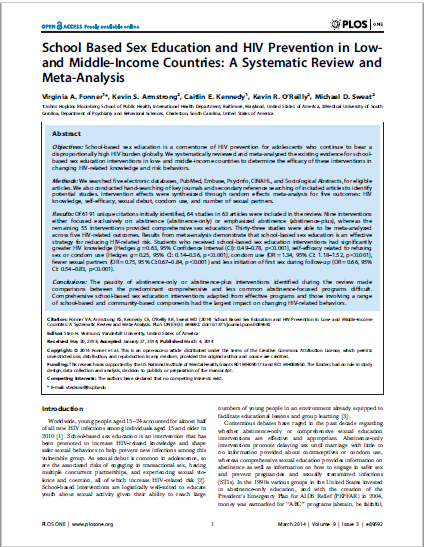 School Based Sex Education and HIV Prevention in Low- and Middle-Income Countries: A Systematic Review and Meta-Analysis

Jan-Walter De Neve and colleagues provide compelling evidence of a causal relation between secondary education and HIV incidence, showing that a policy change in Botswana led to 0·792 additional years of secondary schooling, with each added year reducing HIV risk by 8 percentage points. The estimated cost per HIV infection averted was US$27 753.

One in three new cases of HIV in South Africa is among adolescents. Given that adolescents are particularly affected, scalable and cost-effective prevention programs are urgently needed. This study aims to identify opportunities to integrate technology into youth HIV prevention efforts. In 2012, 1,107 8th – 11th graders completed a paper-and-pencil survey. Respondents were enrolled in one of three public high schools in Langa. Because it is the closest black township to Cape Town, Langa has the highest density of people in the region. Eighty-nine percent of respondents have used text messaging (SMS) and 86% have gone online. If an HIV prevention program was offered online, 66% of youth would be somewhat or extremely likely to access it; slightly fewer (55%) felt the same about SMS-based programming. In comparison, 85% said they would be somewhat or extremely likely to access a school-based HIV prevention program. Interest in Internet-(60%) and SMS-based (54%) HIV prevention programming was similar for youth who had a self-appraised risk for HIV compared to youth who appraised their risk to be lower, as it was for youth who were tired of hearing messages about HIV prevention.

Technology use is common – even among high school students who live in lower income communities. At the same time, these data reveal that it is not uncommon for youth to be tired of hearing messages about HIV prevention, and many of the typical topics key to HIV prevention have low interest levels among youth. HIV prevention researchers need to be mindful of the extent of existing programming that youth are exposed to. Technology-based programming may be especially amenable to meeting these requirements because of its novelty especially in developing countries, and because interactive functionality can be easily integrated into the program design. Given the preference for school- and Internet-based programming, it seems that a hybrid approach is likely feasible and acceptable.

Background: Young girls in sub Saharan Africa are reported to have higher rates of human immunodeficiency virus (HIV) infection compared to boys in the same age group. Knowledge of HIV status amongst high schools learners provides an important gateway to prevention and treatment services. This study aimed at determining the HIV prevalence and explored the feasibility of HIV testing among high school learners.
Methods: Between September 2010 and February 2011, a linked, anonymous cross-sectional survey was conducted in two public sector high schools in the rural KwaZulu-Natal midlands. Following written informed consent, dried blood spot samples (DBS) were collected and tested for HIV. The overall and age-specific HIV prevalence were compared with select demographic variables.
Results: The HIV prevalence in learners aged 12 to 25 in school A was 4.7% (95% CI 2.8-6.5) compared to 2.5% (95% CI 1.6-3.5) in school B, (p = 0.04). Whilst the HIV prevalence was similar for boys at 1.3% (95% CI 0-2.8) in school A and 1.7% (95% CI 0.5-2.8) in school B, the prevalence in girls was consistently higher and was 7.7% (95% CI 4.5-10.9) in school A and 3.2% (95% CI 1.8-4.6) in school B. The age-specific HIV prevalence in girls increased 1.5 to 2 fold for each two year age category, while for boys the prevalence was stable across all age groups.
Conclusions: The high HIV prevalence in female learners underscores the importance of sexual reproductive health and schools-based HIV testing programs as an important gateway to prevention and treatment services.