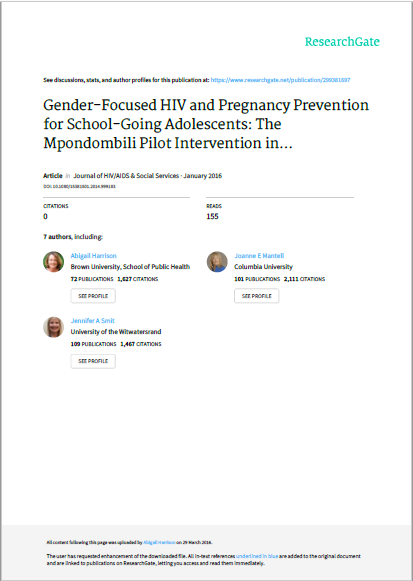 This pilot study evaluated a 15-session classroom intervention for HIV and pregnancy prevention among grade 8–10 boys and girls (aged 14–17 years) in rural South Africa, guided by gender- empowerment theory and implemented by teachers, nurses, and youth peer educators. Pre-and post-intervention surveys included 933 male and female students in two intervention and two comparison schools. The main outcome was condom use at last sex; secondary outcomes were partner communication, gender beliefs and values, perceived peer behaviors, and self- efficacy for safer sex. At 5 months post-intervention, change in condom use did not differ between intervention and comparison schools. Intervention school youth had greater increases in self-efficacy for unsafe sex refusal (odds ratio [OR] 1.61, 95% confidence interval [CI] 1.01–2.57) and condom use (OR 1.76, 95%􀀁 CI 1.07–2.89), partner communication (OR 2.42, 95%􀀁 CI 1.27–4.23), and knowledge of HIV testing opportunities (OR 1.76, 95%􀀁CI 1.08–2.87). This gender-focused pilot intervention increased adolescents’ self-efficacy and partner communication and has potential to improve preventive behaviors. 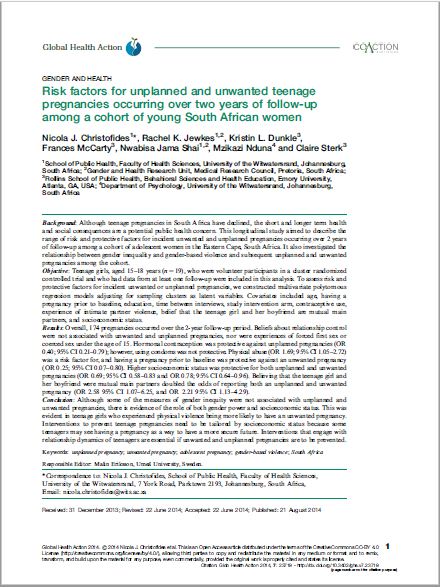 Background: Although teenage pregnancies in South Africa have declined, the short and longer term health and social consequences are a potential public health concern. This longitudinal study aimed to describe the range of risk and protective factors for incident unwanted and unplanned pregnancies occurring over 2 years of follow-up among a cohort of adolescent women in the Eastern Cape, South Africa. It also investigated the relationship between gender inequality and gender-based violence and subsequent unplanned and unwanted pregnancies among the cohort.
Objective: Teenage girls, aged 1518 years (n19), who were volunteer participants in a cluster randomized controlled trial and who had data from at least one follow-up were included in this analysis. To assess risk and protective factors for incident unwanted or unplanned pregnancies, we constructed multivariate polytomous regression models adjusting for sampling clusters as latent variables. Covariates included age, having a pregnancy prior to baseline, education, time between interviews, study intervention arm, contraceptive use, experience of intimate partner violence, belief that the teenage girl and her boyfriend are mutual main partners, and socioeconomic status.
Results: Overall, 174 pregnancies occurred over the 2-year follow-up period. Beliefs about relationship control were not associated with unwanted and unplanned pregnancies, nor were experiences of forced first sex or coerced sex under the age of 15. Hormonal contraception was protective against unplanned pregnancies (OR 0.40; 95% CI 0.210.79); however, using condoms was not protective. Physical abuse (OR 1.69; 95% CI 1.052.72) was a risk factor for, and having a pregnancy prior to baseline was protective against an unwanted pregnancy (OR 0.25; 95% CI 0.070.80). Higher socioeconomic status was protective for both unplanned and unwanted pregnancies (OR 0.69; 95% CI 0.580.83 and OR 0.78; 95% CI 0.640.96). Believing that the teenage girl and her boyfriend were mutual main partners doubled the odds of reporting both an unplanned and unwanted pregnancy (OR 2.58 95% CI 1.076.25, and OR 2.21 95% CI 1.134.29).
Conclusion: Although some of the measures of gender inequity were not associated with unplanned and unwanted pregnancies, there is evidence of the role of both gender power and socioeconomic status. This was evident in teenage girls who experienced physical violence being more likely to have an unwanted pregnancy. Interventions to prevent teenage pregnancies need to be tailored by socioeconomic status because some teenagers may see having a pregnancy as a way to have a more secure future. Interventions that engage with relationship dynamics of teenagers are essential if unwanted and unplanned pregnancies are to be prevented.

Background:  Implementation of safer conception strategies requires knowledge of partner HIV-serostatus. We recruited women and men in a high HIV-prevalence setting for a study to assess periconception risk behavior among individuals reporting HIV-serodiscordant partnerships. We report screening data from that study with the objective of estimating the proportion of individuals who are aware that they are in an HIV-serodiscordant relationship at the time of conception.

Methods:  We screened women and men attending antenatal and antiretroviral clinics in Durban, South Africa for enrollment in a study of periconception risk behavior among individuals with serodiscordant partners. Screening questionnaires assessed for study eligibility including age 18–45 years (for women) or at least 18 years of age (for men), pregnancy in past year (women) or partner pregnancy in the past 3 years (men), HIV status of partner for recent pregnancy, participant’s HIV status, and infected partner’s HIV status having been known before the referent pregnancy.

Conclusions:  In an HIV-endemic setting, awareness of partner HIV serostatus is rare. Innovative strategies to increase HIV testing and disclosure are required to facilitate HIV prevention interventions for serodiscordant couples.

The aim of this study was to describe sexual risk behavior among 239 couples during pregnancy and to examine the relationship of sexual risk behavior with HIV serostatus and intimate partner violence. One-third (31.8 %) of pregnant women and 20.9 % of male partners were HIV positive. HIV risk factors included lack of knowledge of partners’ HIV serostatus, unprotected sexual intercourse and multiple sexual partners. Among men, multivariate logistic regression identified awareness of HIV negative partner status, multiple sexual partners and low levels of partner violence and among women Zulu or Swati ethnicity were associated with unprotected intercourse. HIV positive concordance was associated with protected sex and in multilevel analysis of couples HIV positive status and awareness of the partner’s HIV positive status were associated with protected sex. High levels of HIV risk behaviour was found among couples during pregnancy calling for HIV risk reduction interventions.

BACKGROUND: The HIV risk increases during pregnancy. The elevated risk of HIV acquisition in pregnant women may be explained by behavioural and other factors. The aim of this study was to assess sexual HIV risk behaviour and its associated factors among pregnant women in Mpumalanga, South Africa.

RESULTS: The majority (63%) of the participants had never used a condom with their primary sexual partner in the past 3 months, 60% were not aware of the HIV status of their sexual partner, 7.6% had a casual sexual partner in the past 3 months, 20% had two or more sexual partners in the past 12 months and 17.3% reported to have been diagnosed with a sexually transmitted infection (STI) (other than HIV) in the past 12 months. The various HIV risk behaviours were predicted, by being single and alcohol use for multiple sexual partners; by fewer antenatal visits, being HIV negative and not having used alcohol for lack of condom use; by being HIV positive, having experienced physical partner violence and psychological distress for having been diagnosed with a sexually transmitted infection (other than HIV); and by lower education, unplanned pregnancy, non-antenatal care attendance by expectant father, the belief that antiretrovirals can cure HIV and being HIV positive for having a partner with HIV positve or unknown status.