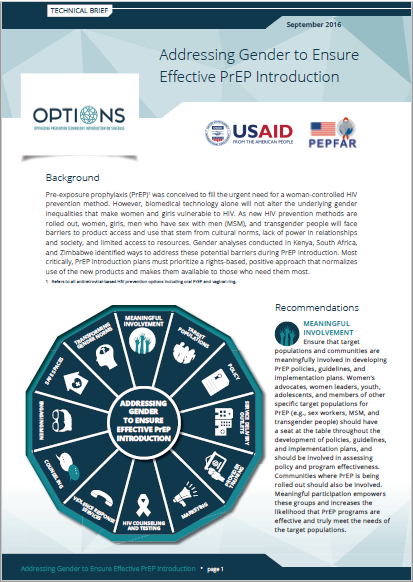 Pre-exposure prophylaxis (PrEP) was conceived to ﬁll the urgent need for a woman-controlled HIV prevention method. However, biomedical technology alone will not alter the underlying gender inequalities that make women and girls vulnerable to HIV. As new HIV prevention methods are rolled out, women, girls, men who have sex with men (MSM), and transgender people will face barriers to product access and use that stem from cultural norms, lack of power in relationships and society, and limited access to resources. Gender analyses conducted in Kenya, South Africa, and Zimbabwe identiﬁed ways to address these potential barriers during PrEP introduction. Most critically, PrEP introduction plans must prioritize a rights-based, positive approach that normalizes use of the new products and makes them available to those who need them most. 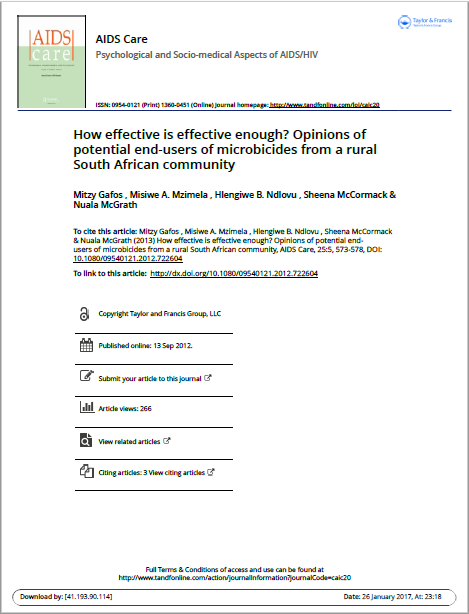 How effective is effective enough? Opinions of potential end-users of microbicides from a rural South African community

To assess the views of potential end-users of a microbicide in KwaZulu-Natal regarding the characteristics that would justify further development, three focus group discussions were conducted in 2009 with 23 local staff members working on a microbicide clinical trial, 20 former trial participants and 14 Community Advisory Board members not enrolled in the trial, in an area with high HIV incidence and low consistent condom use. All participants agreed on the need for additional HIV prevention options that are as effective as possible and can be used by women. The majority of respondents stated that even a highly acceptable HIV prevention option with protection as low as 30% would still be an important addition to condoms for women; that a partially protective microbicide would have to be introduced as part of the existing prevention messages in order to continue promoting condom use; that there should eventually be a choice between antiretroviral (ARV) and non-ARV-based microbicides and a choice of how and where to access microbicides. Respondents also felt it would be important to make plans for access to a microbicide that can offer protection, even if partial, rather than wait to find out if alternative microbicides are equally or more effective. Potential end-users in a high HIV prevalence area believe that a partially effective microbicide would be an important addition to the limited HIV prevention options for women. The significant challenges of introducing a partially protective HIV prevention option were recognised, but seen as ones worth facing, as well as an opportunity to lay the ground work for the introduction of more efficacious HIV prevention methods in the future. 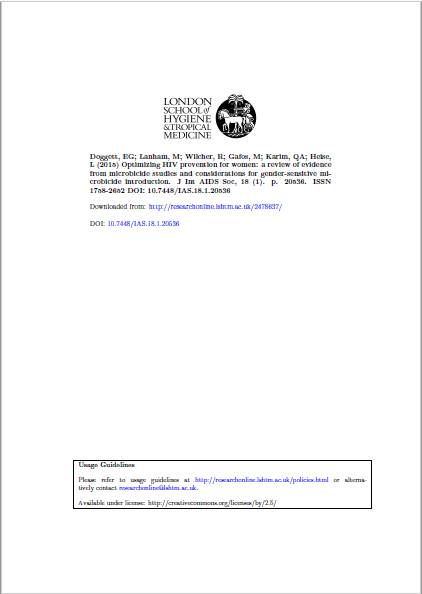 Optimizing HIV prevention for women: a review of evidence from microbicide studies and considerations for gender-sensitive microbicide introduction

Introduction: Microbicides were conceptualized as a product that could give women increased agency over HIV prevention. However, gender-related norms and inequalities that place women and girls at risk of acquiring HIV are also likely to affect their ability to use microbicides. Understanding how gendered norms and inequalities may pose obstacles to women’s microbicide use is important to inform product design, microbicide trial implementation and eventually microbicide and other antiretroviral-based prevention programmes. We reviewed published vaginal microbicide studies to identify gender-related factors that are likely to affect microbicide acceptability, access and adherence. We make recommendations on product design, trial implementation, positioning, marketing and delivery of microbicides in a way that takes into account the gender-related norms and inequalities identified in the review.
Methods: We conducted PubMed searches for microbicide studies published in journals between 2000 and 2013. Search terms included trial names (e.g. ‘‘MDP301’’), microbicide product names (e.g. ‘‘BufferGel’’), researchers’ names (e.g. ‘‘van der Straten’’) and other relevant terms (e.g. ‘‘microbicide’’). We included microbicide clinical trials; surrogate studies in which a vaginal gel, ring or diaphragm was used without an active ingredient; and hypothetical studies in which no product was used. Social and behavioural studies implemented in conjunction with clinical trials and surrogate studies were also included. Although we recognize the importance of rectal microbicides to women, we did not include studies of rectal microbicides, as most of them focused on men who have sex with men. Using a standardized review template, three reviewers read the articles and looked for gender-related findings in key domains (e.g. product acceptability, sexual pleasure, partner communication, microbicide access and adherence).
Results and discussion: The gendered norms, roles and relations that will likely affect women’s ability to access and use microbicides are related to two broad categories: norms regulating women’s and men’s sexuality and power dynamics within intimate relationships. Though norms about women’s and men’s sexuality vary among cultural contexts, women’s sexual behaviour and pleasure are typically less socially acceptable and more restricted than men’s. These norms drive the need for woman-initiated HIV prevention, but also have implications for microbicide acceptability and how they are likely to be used by women of different ages and relationship types. Women’s limited power to negotiate the circumstances of their intimate relationships and sex lives will impact their ability to access and use microbicides. Men’s role in women’s effective microbicide use can range from opposition to non-interference to active support.
Conclusions: Identifying an effective microbicide that women can use consistently is vital to the future of HIV prevention for women. Once such a microbicide is identified and licensed, positioning, marketing and delivering microbicides in a way that takes into account the gendered norms and inequalities we have identified would help maximize access and adherence. It also has the potential to improve communication about sexuality, strengthen relationships between women and men and increase women’s agency over their bodies and their health. 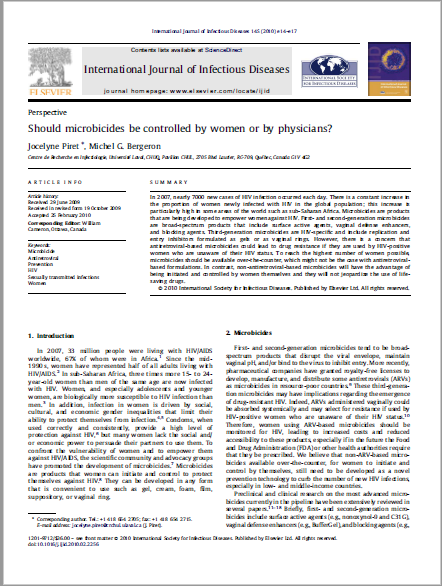 Should microbicides be controlled by women or by physicians?

In 2007, nearly 7000 new cases of HIV infection occurred each day. There is a constant increase in the proportion of women newly infected with HIV in the global population; this increase is particularly high in some areas of the world such as sub-Saharan Africa. Microbicides are products that are being developed to empower women against HIV. First- and second-generation microbicides are broad-spectrum products that include surface active agents, vaginal defense enhancers, and blocking agents. Third-generation microbicides are HIV-speciﬁc and include replication and entry inhibitors formulated as gels or as vaginal rings. However, there is a concern that antiretroviral-based microbicides could lead to drug resistance if they are used by HIV-positive women who are unaware of their HIV status. To reach the highest number of women possible, microbicides should be available over-the-counter, which might not be the case with antiretroviral-based formulations. In contrast, non-antiretroviral-based microbicides will have the advantage of being initiated and controlled by women themselves and they will not jeopardize the use of life-saving drugs. 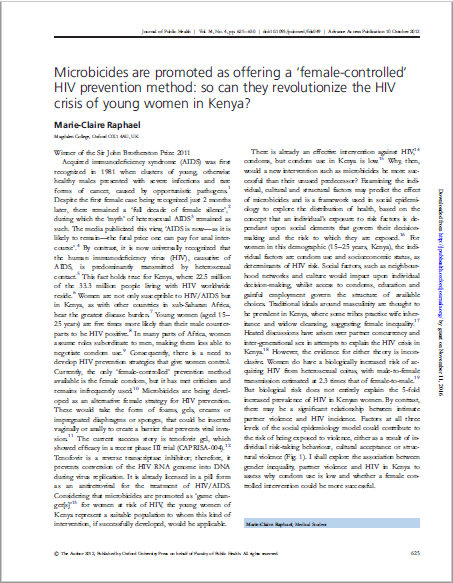 Microbicides are promoted as offering a ‘female-controlled’ HIV prevention method: so can they revolutionize the HIV crisis of young women in Kenya?