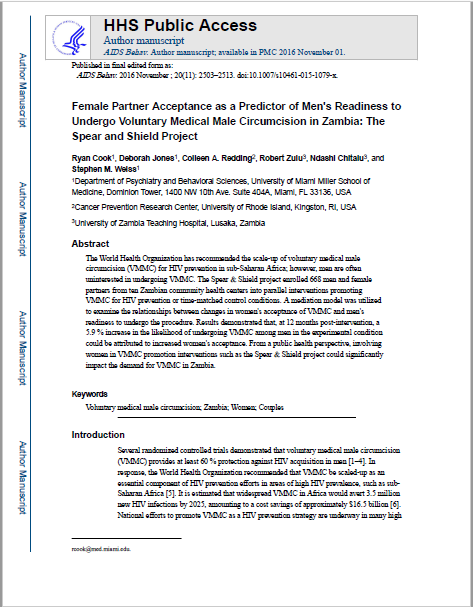 Female Partner Acceptance as a Predictor of Men’s Readiness to Undergo Voluntary Medical Male Circumcision in Zambia: The Spear and Shield Project

The World Health Organization has recommended the scale-up of voluntary medical male circumcision (VMMC) for HIV prevention in sub-Saharan Africa; however, men are often uninterested in undergoing VMMC. The Spear & Shield project enrolled 668 men and female partners from ten Zambian community health centers into parallel interventions promoting VMMC for HIV prevention or time-matched control conditions. A mediation model was utilized to examine the relationships between changes in women’s acceptance of VMMC and men’s readiness to undergo the procedure. Results demonstrated that, at 12 months post-intervention, a 5.9 % increase in the likelihood of undergoing VMMC among men in the experimental condition could be attributed to increased women’s acceptance. From a public health perspective, involving women in VMMC promotion interventions such as the Spear & Shield project could significantly impact the demand for VMMC in Zambia. 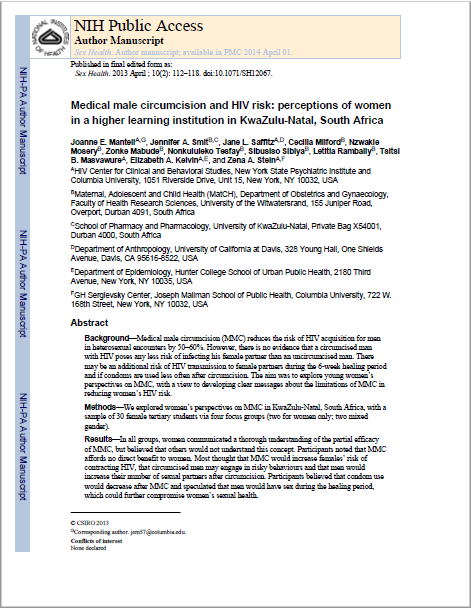 Background: Medical male circumcision (MMC) reduces the risk of HIV acquisition for men in heterosexual encounters by 50–60%. However, there is no evidence that a circumcised man with HIV poses any less risk of infecting his female partner than an uncircumcised man. There may be an additional risk of HIV transmission to female partners during the 6-week healing period and if condoms are used less often after circumcision. The aim was to explore young women’s perspectives on MMC, with a view to developing clear messages about the limitations of MMC in reducing women’s HIV risk.
Methods: We explored women’s perspectives on MMC in KwaZulu-Natal, South Africa, with a sample of 30 female tertiary students via four focus groups (two for women only; two mixed gender).
Results: In all groups, women communicated a thorough understanding of the partial efficacy of MMC, but believed that others would not understand this concept. Participants noted that MMC affords no direct benefit to women. Most thought that MMC would increase females’ risk of contracting HIV, that circumcised men may engage in risky behaviours and that men would increase their number of sexual partners after circumcision. Participants believed that condom use would decrease after MMC and speculated that men would have sex during the healing period, which could further compromise women’s sexual health. Conclusion:The concerns expressed by women regarding MMC highlight the need for including women in the dialogue about MMC and for clarifying the impact of MMC on HIV risk for women. 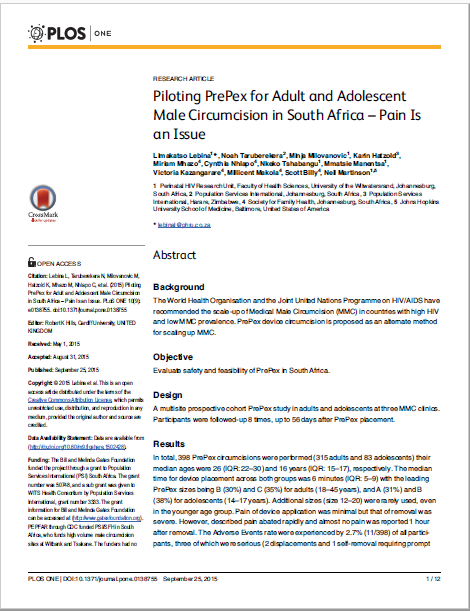 Background
The World Health Organisation and the Joint United Nations Programme on HIV/AIDS have recommended the scale-up of Medical Male Circumcision (MMC) in countries with high HIV and low MMC prevalence. PrePex device circumcision is proposed as an alternate method for scaling up MMC.
Objective
Evaluate safety and feasibility of PrePex in South Africa.
Design
A multisite prospective cohort PrePex study in adults and adolescents at three MMC clinics. Participants were followed-up 8 times, up to 56 days after PrePex placement.
Results
In total, 398 PrePex circumcisions were performed (315 adults and 83 adolescents) their median ages were 26 (IQR: 22–30) and 16 years (IQR: 15–17), respectively. The median time for device placement across both groups was 6 minutes (IQR: 5–9) with the leading PrePex sizes being B (30%) and C (35%) for adults (18–45 years), and A (31%) and B (38%) for adolescents (14–17 years). Additional sizes (size 12–20) were rarely used, even in the younger age group. Pain of device application was minimal but that of removal was severe. However, described pain abated rapidly and almost no pain was reported 1 hour after removal. The Adverse Events rate were experienced by 2.7% (11/398) of all participants, three of which were serious (2 displacements and 1 self-removal requiring prompt surgery). None of the Adverse Events required hospitalization. The majority of participants returned to work within a day of device placement.
Conclusion
Our study shows that PrePex is a safe MMC method, for males 14 years and above. PrePex circumcision had a similar adverse event rate to that reported for surgical MMC, but device removal caused high levels of pain, which subsided rapidly.

Heterosexual exposure accounts for most HIV transmission in sub-Saharan Africa, and this mode, as a proportion of new infections, is escalating globally. The scientific evidence accumulated over more than 20 years shows that among the strategies advocated during this period for HIV prevention, male circumcision is one of, if not, the most efficacious epidemiologically, as well as cost-wise. Despite this, and recommendation of the procedure by global policy makers, national implementation has been slow. Additionally, some are not convinced of the protective effect of male circumcision and there are also reports, unsupported by evidence, that non-sex-related drivers play a major role in HIV transmission in sub-Saharan Africa. Here, we provide a critical evaluation of the state of the current evidence for male circumcision in reducing HIV infection in light of established transmission drivers, provide an update on programmes now in place in this region, and explain why policies based on established scientific evidence should be prioritized. We conclude that the evidence supports the need to accelerate the implementation of medical male circumcision programmes for HIV prevention in generalized heterosexual epidemics, as well as in countering the growing heterosexual transmission in countries where HIV prevalence is presently low.

In the last decade, three randomized controlled trials in Kenya, South Africa, and Uganda have shown that medical male circumcision (MMC) reduces the sexual transmission of HIV from women to men. Objectives of this assessment were to measure acceptability of adult MMC and circumcision of children to inform policies regarding whether and how to promote MMC as an HIV prevention strategy. This mixed-method study, conducted across four Ugandan districts, included a two-stage household survey of 833 adult males and 842 adult females, focus group discussions, and a health provider survey. Respondents’ acceptability of MMC was positive and substantial after being informed about the results of recent randomized trials. In uncircumcised men, between 40% and 62% across the districts would consider getting circumcised. Across the four districts between 60% and 86% of fathers and 49% and 95% of mothers were supportive of MMC for sons. Widespread support exists among men and women in this study for promoting MMC as part of Uganda’s current ‘ABC + ‘ HIV prevention strategy.