Background: Structural drivers of the HIV epidemic are increasingly recognised, and cross-sectional research has shown an association between transactional sex and HIV prevalence, but evidence on the impact of transactional sex on HIV incidence in young women remains limited.
Methods: We tested hypotheses that transactional sex predicted incident HIV infections in a dataset of 1077 HIV negative women aged 15-26 enrolled in a cluster randomised controlled trial. Incidence rate ratios were derived from multivariable Poisson models which included terms for age, HSV2, relationship power, condom use, intimate partner violence (IPV) exposure, treatment, stratum and person years of exposure to HIV.
Results: 127 sexually active women acquired HIV during the study. HIV incidence was greater among women having transactional sex with a once off partner (IRR 3.29 95% CI 1.02, 10.55, p=0.046) and those having transactional sex with an on-going, concurrent partner (IRR 2.05 95% CI 1.20, 3.52, p=0.009). An analysis was performed to distinguish between the effects of a transactional sexual encounter or relationship and having a higher number of sexual partners or older partners, which are usually entailed in transactional sex. Women having transactional sex with a casual partner (on-going or once off) and two or more partners during follow up had an elevated risk of HIV acquisition (IRR 2.23 95% CI 1.28, 3.88, p=0.005), where as those just having two or more partners did not (IRR 1.20 95% CI 0.81, 1.77, p=0.368). Women with partners 5 or more years older did not have an elevated risk of HIV.
Conclusions: Transactional sex with an on-going or once off partner elevates young women’s risk of HIV infection. This finding is independent of partner number or age. These findings support the need for structural interventions in HIV prevention, with a stronger focus on reducing transactional sex. 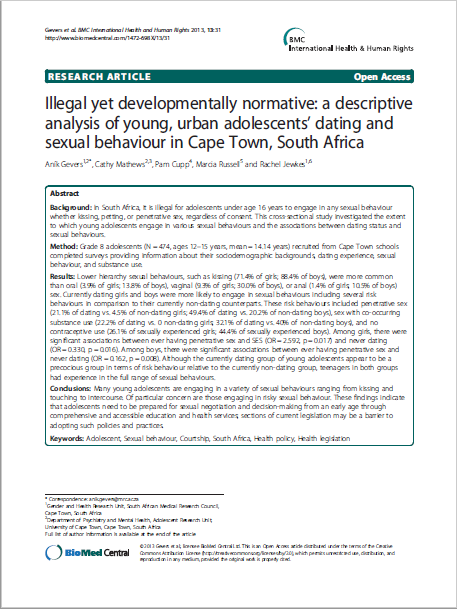 Background: In South Africa, it is illegal for adolescents under age 16 years to engage in any sexual behaviour whether kissing, petting, or penetrative sex, regardless of consent. This cross-sectional study investigated the extent to which young adolescents engage in various sexual behaviours and the associations between dating status and sexual behaviours.
Method: Grade 8 adolescents (N = 474, ages 12–15 years, mean = 14.14 years) recruited from Cape Town schools completed surveys providing information about their sociodemographic backgrounds, dating experience, sexual behaviour, and substance use.
Results: Lower hierarchy sexual behaviours, such as kissing (71.4% of girls; 88.4% of boys), were more common than oral (3.9% of girls; 13.8% of boys), vaginal (9.3% of girls; 30.0% of boys), or anal (1.4% of girls; 10.5% of boys) sex. Currently dating girls and boys were more likely to engage in sexual behaviours including several risk behaviours in comparison to their currently non-dating counterparts. These risk behaviours included penetrative sex (21.1% of dating vs. 4.5% of non-dating girls; 49.4% of dating vs. 20.2% of non-dating boys), sex with co-occurring substance use (22.2% of dating vs. 0 non-dating girls; 32.1% of dating vs. 40% of non-dating boys), and no contraceptive use (26.1% of sexually experienced girls; 44.4% of sexually experienced boys). Among girls, there were significant associations between ever having penetrative sex and SES (OR = 2.592, p = 0.017) and never dating(OR = 0.330, p = 0.016). Among boys, there were significant associations between ever having penetrative sex and never dating (OR = 0.162, p = 0.008). Although the currently dating group of young adolescents appear to be a precocious group in terms of risk behaviour relative to the currently non-dating group, teenagers in both groups had experience in the full range of sexual behaviours. Conclusions: Many young adolescents are engaging in a variety of sexual behaviours ranging from kissing and touching to intercourse. Of particular concern are those engaging in risky sexual behaviour. These findings indicate that adolescents need to be prepared for sexual negotiation and decision-making from an early age through comprehensive and accessible education and health services; sections of current legislation may be a barrier to adopting such policies and practices. 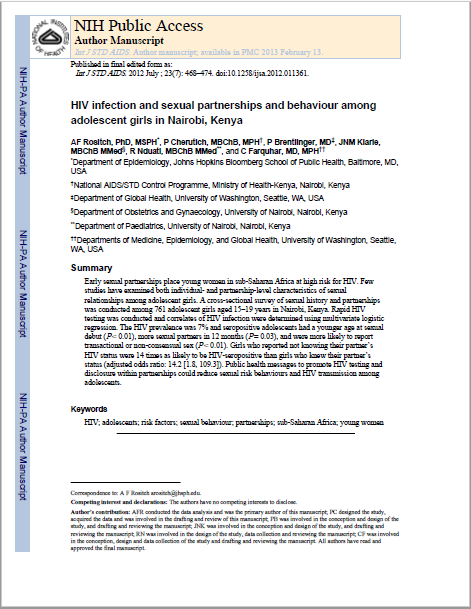 HIV infection and sexual partnerships and behaviour among adolescent girls in Nairobi, Kenya

Early sexual partnerships place young women in sub-Saharan Africa at high risk for HIV. Few studies have examined both individual- and partnership-level characteristics of sexual relationships among adolescent girls. A cross-sectional survey of sexual history and partnerships was conducted among 761 adolescent girls aged 15–19 years in Nairobi, Kenya. Rapid HIV testing was conducted and correlates of HIV infection were determined using multivariate logistic regression. The HIV prevalence was 7% and seropositive adolescents had a younger age at sexual debut (P < 0.01), more sexual partners in 12 months (P = 0.03), and were more likely to report transactional or non-consensual sex (P < 0.01). Girls who reported not knowing their partner’s HIV status were 14 times as likely to be HIV-seropositive than girls who knew their partner’s status (adjusted odds ratio: 14.2 [1.8, 109.3]). Public health messages to promote HIV testing and disclosure within partnerships could reduce sexual risk behaviours and HIV transmission among adolescents.

Background: Prevalence rates of human immunodeficiency virus (HIV) infection among the youth are disproportionately high compared to that of other age groups in Kenya. Poor mental health has been linked to risky HIV behaviour, yet few local studies have explored these aspects. This study sought to determine associations between HIV risky sexual behaviour and depression among undergraduate students at the University of Nairobi.
Method: A random sample of 923 (525 males and 365 females) undergraduate students was interviewed using a questionnaire to record sociodemographic variables and risky sexual behaviour including having multiple sexual partners, inconsistent condom use and engaging in sex after drinking. Depressive symptoms were measured using the Centre for Epidemiological Studies Short Depression Scale (CES-D 10).
Results: The students’ mean age was 23 years (s.d.4.0). Overall, 41.33% of the students scored above the cut-off point of 10 on the CES-D 10 scale, with 35.71% having moderate symptoms and 5.62% having severe depressive symptoms. The percentage of those who had ever been diagnosed with sexually transmitted infections (STIs) was 9.71% (males 8.65%; females 11.01%); and for HIV 3.04% (males 2.02%; females 4.05%). Nearly 30% reported having had multiple partners in the previous 12 months, 27.4% of the students did not use condoms with sexual partners and 21% had engaged in sex after drinking within the previous 3 months. In multivariable-bivariate logistic regression, being older, having depressive symptoms, alcohol use/binge drinking, tobacco use, sex after drinking, previous diagnosis of STI, physical abuse, sexual coercion and history of sexual abuse as a child were significantly associated with having multiple partners. Further, younger age, being female, tobacco use and previous diagnosis of STI were significantly associated with inconsistent condom use.
Conclusion: The prevalence of HIV rate infection is low compared to the national average but risky sexual behaviour is common among the students and is positively linked to depressive symptoms among other factors. Programmes aimed at HIV prevention should be integrated with mental health interventions.

HIV/AIDS prevalence among Nigerian youth remains one of the highest in the world. Although studies confirmed a high knowledge of HIV among Nigerian youth, there is a lag in linking HIV/AIDS knowledge with protective sexual behaviour.
The study utilized data from the Nigeria 2007 National HIV/AIDS and Reproductive Health Survey (NARHS). Analysis was on 865 sexually active adolescents.
About 75% of adolescents had good knowledge of HIV/AIDS. Logistic regression models showed that HIV knowledge was significant predictor of non-use of condom (OR=2.34; p=0.041) and accepting gifts for sex (OR=2.02 p=0.043) among male, and predictor of multiple sexual partners (OR=1.30; p=0.023) among females. Regardless of HIV knowledge, higher education, older age at first sex, higher wealth index and urban residency are significant predictors of engagement in non-protective sexual behaviour.
The study concludes that high knowledge of HIV/AIDS is not statistically significant in HIV protective attitudes among adolescents.