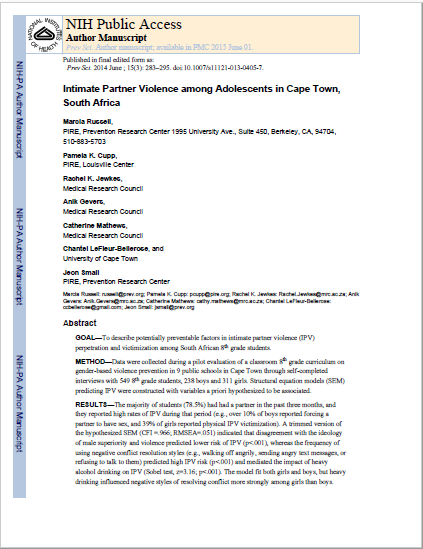 GOAL—To describe potentially preventable factors in intimate partner violence (IPV) perpetration and victimization among South African 8th grade students.
METHOD—Data were collected during a pilot evaluation of a classroom 8th grade curriculum on gender-based violence prevention in 9 public schools in Cape Town through self-completed interviews with 549 8th grade students, 238 boys and 311 girls. Structural equation models (SEM) predicting IPV were constructed with variables a priori hypothesized to be associated.
RESULTS—The majority of students (78.5%) had had a partner in the past three months, and they reported high rates of IPV during that period (e.g., over 10% of boys reported forcing a partner to have sex, and 39% of girls reported physical IPV victimization). A trimmed version of the hypothesized SEM (CFI =.966; RMSEA=.051) indicated that disagreement with the ideology of male superiority and violence predicted lower risk of IPV (p<.001), whereas the frequency of using negative conflict resolution styles (e.g., walking off angrily, sending angry text messages, or refusing to talk to them) predicted high IPV risk (p<.001) and mediated the impact of heavy alcohol drinking on IPV (Sobel test, z=3.16; p<.001). The model fit both girls and boys, but heavy drinking influenced negative styles of resolving conflict more strongly among girls than boys. CONCLUSIONS—Findings suggest that interventions to reduce IPV among South African adolescents should challenge attitudes supportive of male superiority and violence; encourage use of positive conflict resolution styles; and discourage heavy alcohol use among both boys and girls. 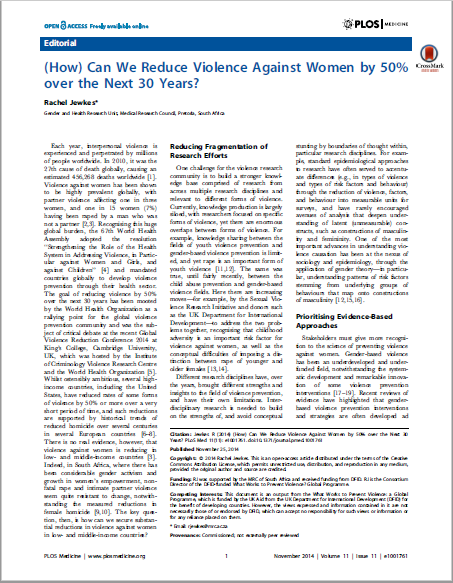 (How) Can We Reduce Violence Against Women by 50% over the Next 30 Years?

Each year, interpersonal violence is experienced and perpetrated by millions of people worldwide. In 2010, it was the 27th cause of death globally, causing an estimated 456,268 deaths worldwide . Violence against women has been shown to be highly prevalent globally, with partner violence affecting one in three women, and one in 15 women (7%) having been raped by a man who was not a partner. 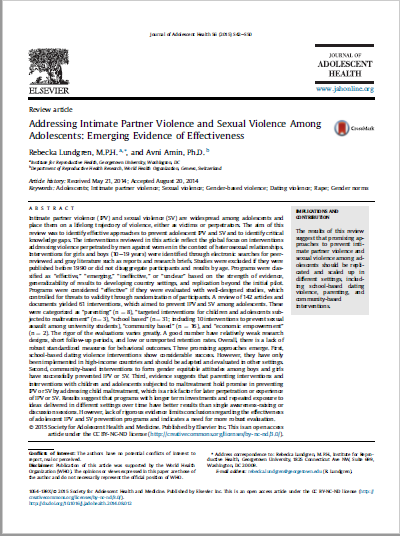 Intimate partner violence (IPV) and sexual violence (SV) are widespread among adolescents and place them on a lifelong trajectory of violence, either as victims or perpetrators. The aim of this review was to identify effective approaches to prevent adolescent IPV and SV and to identify critical knowledge gaps. The interventions reviewed in this article reﬂect the global focus on interventions addressing violence perpetrated by men against women in the context of heterosexual relationships. Interventions for girls and boys (10e19 years) were identiﬁed through electronic searches for peer-reviewed and gray literature such as reports and research briefs. Studies were excluded if they were published before 1990 or did not disaggregate participants and results by age. Programs were clas-siﬁed as “effective,”“emerging,”“ineffective,” or “unclear” based on the strength of evidence, generalizability of results to developing country settings, and replication beyond the initial pilot. Programs were considered “effective” if they were evaluated with well-designed studies, which controlled for threats to validity through randomization of participants. A review of 142 articles and documents yielded 61 interventions, which aimed to prevent IPV and SV among adolescents. These were categorized as “parenting” (n ¼ 8), “targeted interventions for children and adolescents sub-jected to maltreatment” (n ¼ 3), “school based” (n ¼ 31; including 10 interventions to prevent sexual assault among university students), “community based” (n ¼ 16), and “economic empowerment” (n ¼ 2). The rigor of the evaluations varies greatly. A good number have relatively weak research designs, short follow-up periods, and low or unreported retention rates. Overall, there is a lack of robust standardized measures for behavioral outcomes. Three promising approaches emerge. First, school-based dating violence interventions show considerable success. However, they have only been implemented in high-income countries and should be adapted and evaluated in other settings. Second, community-based interventions to form gender equitable attitudes among boys and girls have successfully prevented IPV or SV. Third, evidence suggests that parenting interventions and interventions with children and adolescents subjected to maltreatment hold promise in preventing IPV or SV by addressing child maltreatment, which is a risk factor for later perpetration or experience of IPV or SV. Results suggest that programs with longer term investments and repeated exposure to ideas delivered in different settings over time have better results than single awareness-raising or discussion sessions. However, lack of rigorous evidence limits conclusions regarding the effectiveness of adolescent IPV and SV prevention programs and indicates a need for more robust evaluation. 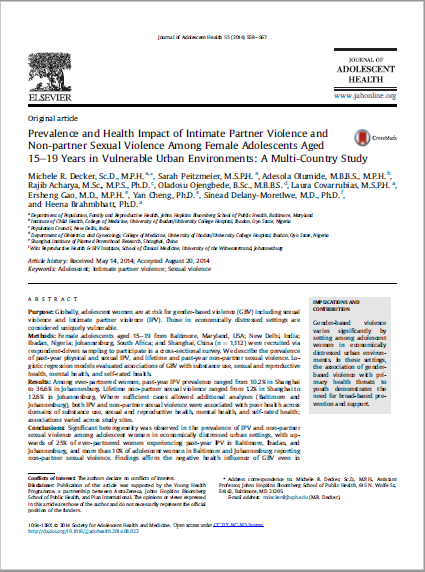 Purpose: Globally, adolescent women are at risk for gender-based violence (GBV) including sexual violence and intimate partner violence (IPV). Those in economically distressed settings are considered uniquely vulnerable.
Methods: Female adolescents aged 15-19 from Baltimore, Maryland, USA; New Delhi, India; Ibadan, Nigeria; Johannesburg, South Africa; and Shanghai, China (n ¼ 1,112) were recruited via respondent-driven sampling to participate in a cross-sectional survey. We describe the prevalence of past-year physical and sexual IPV, and lifetime and past-year non-partner sexual violence. Logistic regression models evaluated associations of GBV with substance use, sexual and reproductive health, mental health, and self-rated health.
Results: Among ever-partnered women, past-year IPV prevalence ranged from 10.2% in Shanghai to 36.6% in Johannesburg. Lifetime non-partner sexual violence ranged from 1.2% in Shanghai to 12.6% in Johannesburg. Where sufﬁcient cases allowed additional analyses (Baltimore and Johannesburg), both IPV and non-partner sexual violence were associated with poor health across domains of substance use, sexual and reproductive health, mental health, and self-rated health; associations varied across study sites.
Conclusions: Signiﬁcant heterogeneity was observed in the prevalence of IPV and non-partner sexual violence among adolescent women in economically distressed urban settings, with up-wards of 25% of ever-partnered women experiencing past-year IPV in Baltimore, Ibadan, and Johannesburg, and more than 10% of adolescent women in Baltimore and Johannesburg reporting non-partner sexual violence. Findings afﬁrm the negative health inﬂuence of GBV even in disadvantaged urban settings that present a range of competing health threats. A multisectoral response is needed to prevent GBV against young women, mitigate its health impact, and hold perpetrators accountable. 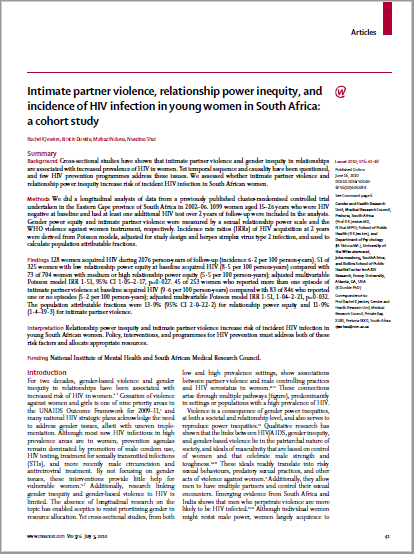 Nearly one-third of South African men report enacting intimate partner violence (IPV). Beyond direct health consequences for women, IPV is also linked to varied risk behaviours among men who enact it, including alcohol abuse, risky sex, and poor health care uptake. Little is known about how to reduce IPV perpetration among men. We conducted retrospective, in-depth interviews with men (n=53) who participated in a rural South African program that targeted masculinities, HIV risk, and IPV. We conducted computer-assisted thematic qualitative coding alongside a simple rubric to understand how the program may lead to changes in IPV perpetration. Many men described new patterns of reduced alcohol intake and improved partner communication, allowing them to respond in ways that did not lead to the escalation of violence. Sexual decision-making changed via reduced sexual entitlement and increased mutuality about whether to have sex. Men articulated the intertwined nature of each of these topics, suggesting a syndemic lens may be useful for understanding IPV. These data suggest that alcohol and sexual relationship skills may be useful levers for future IPV programming, and that IPV may be a tractable issue as men learn new skills for enacting masculinities in their household and in intimate relationships.