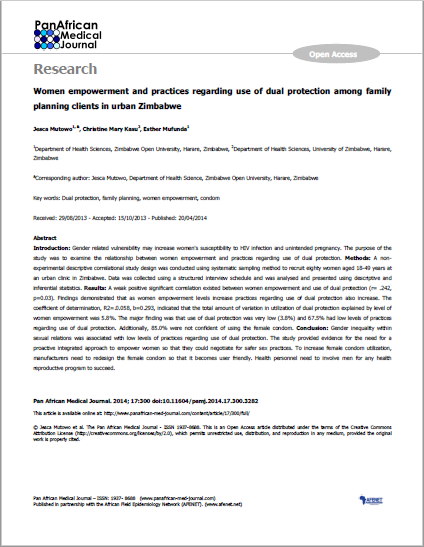 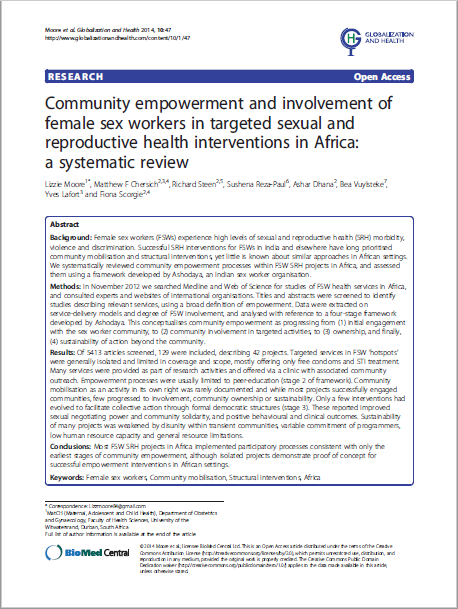 Community empowerment and involvement of female sex workers in targeted sexual and reproductive health interventions in Africa: a systematic review

Background: Female sex workers (FSWs) experience high levels of sexual and reproductive health (SRH) morbidity, violence and discrimination. Successful SRH interventions for FSWs in India and elsewhere have long prioritised community mobilisation and structural interventions, yet little is known about similar approaches in African settings. We systematically reviewed community empowerment processes within FSW SRH projects in Africa, and assessed them using a framework developed by Ashodaya, an Indian sex worker organisation.
Methods: In November 2012 we searched Medline and Web of Science for studies of FSW health services in Africa, and consulted experts and websites of international organisations. Titles and abstracts were screened to identify studies describing relevant services, using a broad definition of empowerment. Data were extracted on
service-delivery models and degree of FSW involvement, and analysed with reference to a four-stage framework developed by Ashodaya. This conceptualises community empowerment as progressing from (1) initial engagement with the sex worker community, to (2) community involvement in targeted activities, to (3) ownership, and finally,(4) sustainability of action beyond the community.
Results: Of 5413 articles screened, 129 were included, describing 42 projects. Targeted services in FSW ‘hotspots’ were generally isolated and limited in coverage and scope, mostly offering only free condoms and STI treatment. Many services were provided as part of research activities and offered via a clinic with associated community outreach. Empowerment processes were usually limited to peer-education (stage 2 of framework). Community mobilisation as an activity in its own right was rarely documented and while most projects successfully engaged communities, few progressed to involvement, community ownership or sustainability. Only a few interventions had evolved to facilitate collective action through formal democratic structures (stage 3). These reported improved sexual negotiating power and community solidarity, and positive behavioural and clinical outcomes. Sustainability of many projects was weakened by disunity within transient communities, variable commitment of programmers, low human resource capacity and general resource limitations.
Conclusions: Most FSW SRH projects in Africa implemented participatory processes consistent with only the earliest stages of community empowerment, although isolated projects demonstrate proof of concept for successful empowerment interventions in African settings.

Managing men: women’s dilemmas about overt and covert use of barrier methods for HIV prevention

Women in sub-Saharan Africa are at high risk of HIV infection and may struggle to negotiate condom use. This has led to a focus on the development of female-controlled barrier methods such as the female condom, microbicides and the diaphragm. One of the advantages of such products is their contribution to female empowerment through attributes that make covert use possible. We used focus groups to discuss covert use of barrier methods with a sample of South African women aged 18-50 years from Eastern Johannesburg. Women’s attitudes towards covert use of HIV prevention methods were influenced by the overarching themes of male dislike of HIV and pregnancy prevention methods, the perceived untrustworthiness of men and social interpretations of female faithfulness. Women’s discussions ranged widely from overt to covert use of barrier methods for HIV prevention and were influenced by partner characteristics and previous experience with contraception and HIV prevention. The discussions indicate that challenging gender norms for HIV prevention can be achieved in quite subtle ways, in a manner that suits individual women’s relationships and previous experiences with negotiation of either HIV or pregnancy prevention.

Methods: We piloted Stepping Stones with Creating Futures in two informal settlements of Durban with 232 out of school youth, mostly aged 18-30 and evaluated with a shortened interrupted time series of two baseline surveys and at 28 and 58 weeks post-baseline. 94/110 men and 111/122 women completed the last assessment, 85.5% and 90.2% respectively of those enrolled. To determine trend, we built random effects regression models with each individual as the cluster for each variable, and measured the slope of the line across the time points.

Conclusions: These findings are very positive for an exploratory study and indicate that the Creating Futures/Stepping Stones intervention has potential for impact in these difficult areas with young men and women. Further evaluation is needed.