The influence of perceived behaviour control, attitude and empowerment on reported condom use and intention to use condoms among adolescents in rural Tanzania

Background: Despite the declining trends of Human immunodeficiency virus (HIV) infection in Sub-Saharan Africa (SSA), unsafe sexual behaviours among adolescents still represent a public health challenge. It is important to understand factors acting at different levels to influence sexual behaviour among adolescents. This study examined the influence of perceived behaviour control, subjective norms, attitudes and empowerment on intention to use condoms and reported use of condoms among adolescents in rural Tanzania.
Methods: We used a questionnaire to collect data from 403 adolescents aged 14 through 19 years from nine randomly selected secondary schools in the Newala district located in the Southern part of Tanzania. The self-administered questionnaire collected information on sexual practices and factors such as attitudes, subjective norms, perceived behaviour control and empowerment. Binary logistic regression was performed to identify factors associated with intention to use and reported use of condoms.
Results: Sexually active adolescents constituted 40.6 % of the sample, among them 49.7 % did not use a condom at last sexual intercourse and 49.8 % had multiple sex partners. Many (85 %) of sexually active respondents had their sexual debut between the ages of 14 to 17 years. Girls became sexually active earlier than boys. Perceived behaviour control predicted intentions to use condoms (AOR = 3.059, 95 % CI 1.324-7.065), thus demonstrating
its importance in the decision to use a condom. Empowerment (odds ratio = 3.694, 95 % CI 1.295-10.535) and a positive attitude (AOR = 3.484, 95 % CI 1.132-10.72) predicted reported condom use, thus turning the decision to actions. Subjective norms had only indirect effects on intention and reported use of condoms.
Conclusion: The findings suggest that unsafe sex practices are prevalent among school adolescents in rural
areas of Tanzania. Perceived behaviour control and positive attitudes predict intensions to use condoms whereas empowerment predicts reported condom use. The findings may imply that safe sex promotion interventions that simultaneously address socio-cognitive and ecological determinants of sexual behaviours may improve adolescents’ safe sex behaviours. 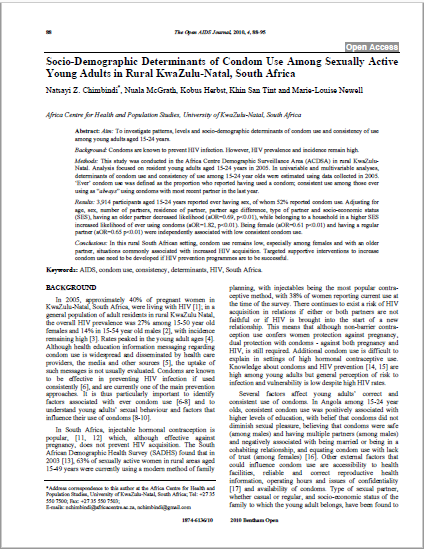 Aim: To investigate patterns, levels and socio-demographic determinants of condom use and consistency of use among young adults aged 15-24 years.
Background: Condoms are known to prevent HIV infection. However, HIV prevalence and incidence remain high.
Methods: This study was conducted in the Africa Centre Demographic Surveillance Area (ACDSA) in rural KwaZulu-Natal. Analysis focused on resident young adults aged 15-24 years in 2005. In univariable and multivariable analyses, determinants of condom use and consistency of use among 15-24 year olds were estimated using data collected in 2005. ‘Ever’ condom use was defined as the proportion who reported having used a condom; consistent use among those ever using as “always” using condoms with most recent partner in the last year.
Results: 3,914 participants aged 15-24 years reported ever having sex, of whom 52% reported condom use. Adjusting for age, sex, number of partners, residence of partner, partner age difference, type of partner and socio-economic status (SES), having an older partner decreased likelihood (aOR=0.69, p<0.01), while belonging to a household in a higher SES increased likelihood of ever using condoms (aOR=1.82, p<0.01). Being female (aOR=0.61 p<0.01) and having a regular partner (aOR=0.65 p<0.01) were independently associated with low consistent condom use.
Conclusions: In this rural South African setting, condom use remains low, especially among females and with an older partner, situations commonly associated with increased HIV acquisition. Targeted supportive interventions to increase condom use need to be developed if HIV prevention programmes are to be successful. 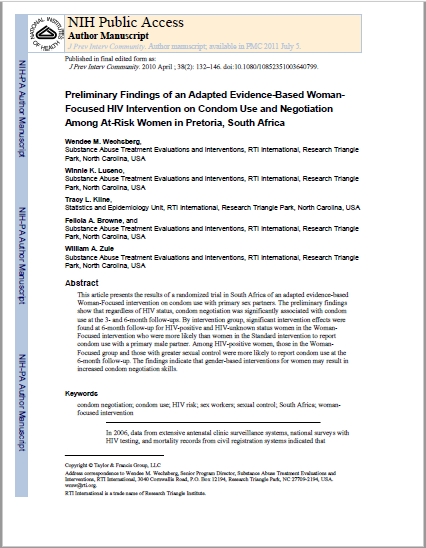 Preliminary Findings of an Adapted Evidence-Based Woman- Focused HIV Intervention on Condom Use and Negotiation Among At-Risk Women in Pretoria, South Africa 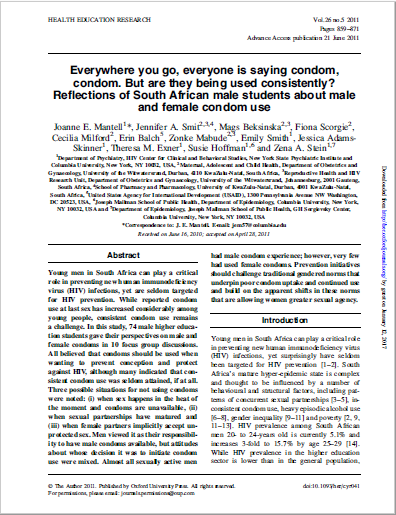 Everywhere you go, everyone is saying condom, condom. But are they being used consistently?Reﬂections of South African male students about male and female condom use

Young men in South Africa can play a critical role in preventing new human immunodeﬁciency virus (HIV) infections, yet are seldom targeted for HIV prevention. While reported condom use at last sex has increased considerably among young people, consistent condom use remains a challenge.In this study,74 male higher education students gave their perspectives on male and female condoms in 10 focus group discussions. All believed that condoms should be used when wanting to prevent conception and protect against HIV, although many indicated that consistent condom use was seldom attained, if at all. Three possible situations for not using condoms were noted: (i) when sex happens in the heat of the moment and condoms are unavailable, (ii) when sexual partnerships have matured and (iii) when female partners implicitly accept unprotected sex. Men viewed it as their responsibility to have male condoms available, but attitudes about whose decision it was to initiate condom use were mixed. Almost all sexually active men had male condom experience; however, very few had used female condoms. Prevention initiatives should challenge traditional gendered norms that underpin poor condom uptake and continued use and build on the apparent shifts in these norms that are allowing women greater sexual agency.

Condoms are an essential component of comprehensive efforts to control the HIV epidemic, both for those who know their status and for those who do not. Although young people account for almost half of all new HIV infections, reported condom use among them remains low in many sub-Saharan African countries. In order to inform education and communication efforts to increase condom use, we examined social representations of condoms among young people aged 10–24 in six African countries/regions with diverse HIV prevalence rates: Swaziland, Namibia, Kenya, South-East Nigeria, Burkina Faso, and Senegal. We used a unique data source, namely 11,354 creative ideas contributed from these countries to a continent-wide scriptwriting contest, held from 1st February to 15th April 2005, on the theme of HIV/AIDS. We stratified each country sample by the sex, age (10–14, 15–19, 20–24), and urban/rural location of the author and randomly selected up to 10 narratives for each of the 12 resulting strata, netting a total sample of 586 texts for the six countries. We analyzed the narratives qualitatively using thematic data analysis and narrative-based methodologies. Differences were observed across settings in the prominence accorded to condoms, the assessment of their effectiveness, and certain barriers to and facilitators of their use. Moralization emerged as a key impediment to positive representations of condoms, while humour was an appealing means to normalize them. The social representations in the narratives identify communication needs in and across settings and provide youth-focused ideas and perspectives to inform future intervention efforts.