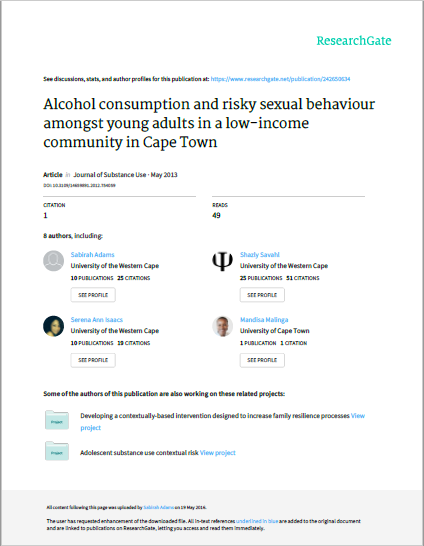 Aims: The aim of the study was to explore alcohol use and risky sexual behaviour among young adults in a low-income community in Cape Town. Design and setting: The study followed a descriptive correlational design within a quantitative methodological framework. More specifically, a participatory research model was employed in collaboration with young people attending a secondary school in the participating community. Data collection: The street-intercept method was used to administer a structured questionnaire consisting of the Alcohol Use Disorders Identification Test and the Self-Report Risky Sexual Behaviours Scale. Findings: A key finding of this study contributes to the established body of research demonstrating a significant relationship between alcohol consumption and RSB (r ¼ 0.48; p 􀀁 0.01; N ¼ 143). Another crucial finding of the study indicates that a substantial amount of the participants are classified as either harmful drinkers (Males ¼ 20.0%; Females ¼ 17.8%) or being alcohol dependent (Males ¼ 54.3%; Females ¼ 47.9%). Conclusions: These statistics are a typical reflection of drinking behaviour in impoverished communities in Cape Town and South Africa in general. The findings display the exigency for interventions to start at both the primary and secondary school level to counter the effects and consequences of alcohol consumption and risky sexual behaviour among young adults in this community. 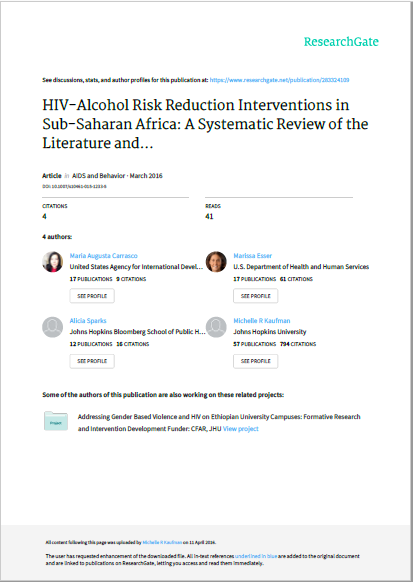 HIV-Alcohol Risk Reduction Interventions in Sub-Saharan Africa: A Systematic Review of the Literature and Recommendations for a Way Forward 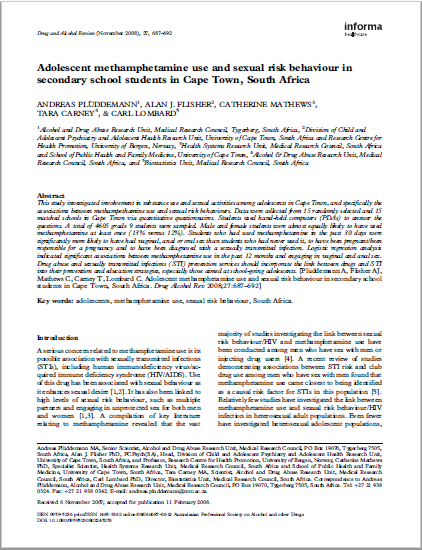 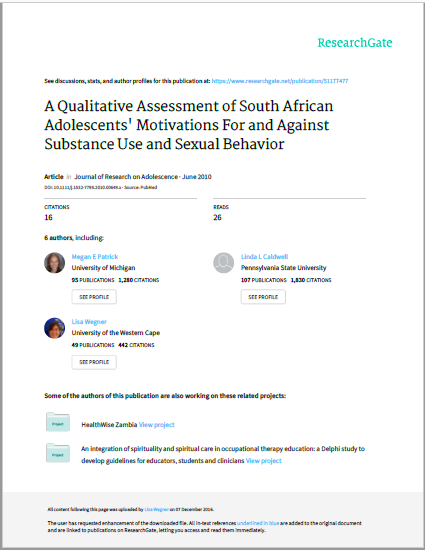 Focus groups (N = 15 groups; eight with girls, seven with boys) with adolescents in high schools near Cape Town, South Africa were used to conduct a qualitative investigation of reported reasons for using and not using substances, and for having and not having sex. Adolescents reported Enhancement, Negative States, Social, and Aversive Social motivations for both substance use and sexual behavior. In addition, being addicted as a reason for using drugs and rape as a context for sexual behavior were frequently reported. Motivations against behaviors included Physical/Behavioral Consequences, Ethical Objections, Social Disapproval, and Activities or Future Orientation reasons. Preventive interventions should address existing motivations for and against substance use and sexual behavior to acknowledge adolescents’ experiences in context. 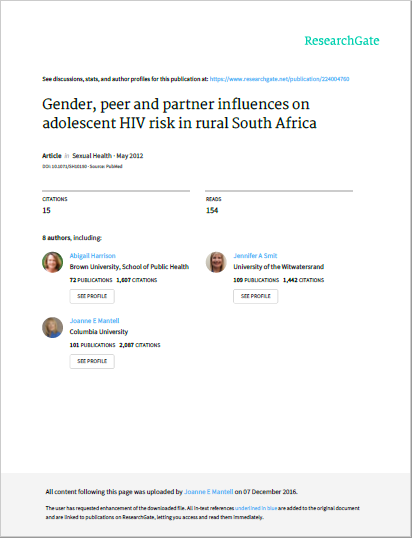 Background and methods: In preparation for a school-based intervention in KwaZulu-Natal, South Africa, a cross-sectional survey of potential HIV risk factors in youth aged 14–17 (n = 983) was conducted. Results: Boys were signiﬁcantly more likely than girls to report lifetime sexual activity (37.7% v. 13.8%, P < 0.01). Among boys and girls, 46.1% reported condom use at last sex. Discussion of condom use with a partner was the strongest predictor of condom use (boys, odds ratio (OR) = 7.39; girls, OR = 5.58, P < 0.0001). Age was independently associated with sexual activity for boys (OR = 1.49, P < 0.0001) and girls (OR = 1.74, P = 0.02). For boys, perceptions of male peer behaviour were associated with both ever having participated in sexual activity (OR = 1.48, P < 0.01) and condom use at last sex (OR = 1.79, P < 0.01). Girls who equated condom use with having numerous partners were more likely to use them. Among boys, results challenged some expected gender beliefs: support for girls’ initiative in relationship formation and refusal of sex were signiﬁcant predictors of sexual activity. Among girls, higher pregnancy risk perception (OR = 1.32, P = 0.02) and knowledge (OR = 4.85, P = 0.055) were associated with sexual activity. Conclusions: Creating more gender equitable norms can reduce HIV risk behaviours. HIV prevention interventions should build on existing gender equitable beliefs, and work to promote others, including sexual communication and negotiation skills, and modelling of positive peer norms.