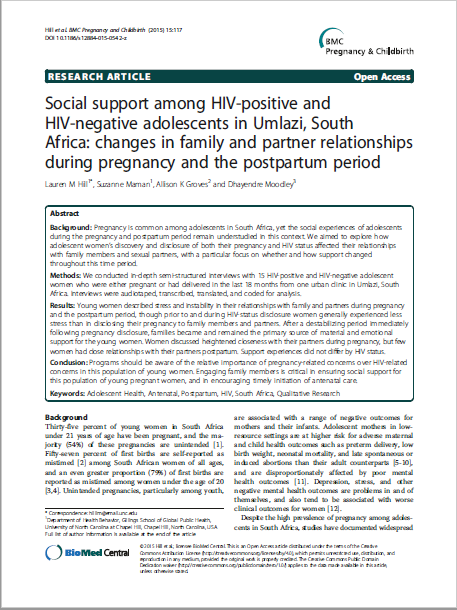 Social support among HIV-positive and HIV-negative adolescents in Umlazi, South Africa: changes in family and partner relationships during pregnancy and the postpartum period

Background: Pregnancy is common among adolescents in South Africa, yet the social experiences of adolescents during the pregnancy and postpartum period remain understudied in this context. We aimed to explore how adolescent women’s discovery and disclosure of both their pregnancy and HIV status affected their relationships with family members and sexual partners, with a particular focus on whether and how support changed throughout this time period.
Methods: We conducted in-depth semi-structured interviews with 15 HIV-positive and HIV-negative adolescent women who were either pregnant or had delivered in the last 18 months from one urban clinic in Umlazi, South Africa. Interviews were audiotaped, transcribed, translated, and coded for analysis.
Results: Young women described stress and instability in their relationships with family and partners during pregnancy and the postpartum period, though prior to and during HIV-status disclosure women generally experienced less stress than in disclosing their pregnancy to family members and partners. After a destabilizing period immediately following pregnancy disclosure, families became and remained the primary source of material and emotional support for the young women. Women discussed heightened closeness with their partners during pregnancy, but few women had close relationships with their partners postpartum. Support experiences did not differ by HIV status.
Conclusion: Programs should be aware of the relative importance of pregnancy-related concerns over HIV-related concerns in this population of young women. Engaging family members is critical in ensuring social support for this population of young pregnant women, and in encouraging timely initiation of antenatal care.

Obligation to family during times of transition: care, support and the response to HIV and AIDS in rural South Africa

In rural South Africa, high HIV prevalence has the potential to affect the care and support that kin are able to provide to those living with HIV. Despite this, families seem to be largely resilient and a key source of care and support to family affected by HIV. In this article, we explore the motivations for the provision of care and support by kin. We use the results of a small-scale in-depth qualitative study conducted in 10 households over 6 months in rural KwaZulu-Natal, South Africa, to show that family obligation and conditional reciprocity operate in varying degrees and build social capital. We highlight the complexity of kin relations where obligation is not guaranteed or is limited, requiring the consideration of policy measures that provide means of social support that are not reliant on the family. 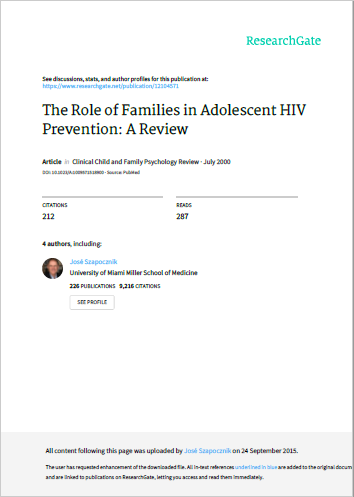 The Role of Families in Adolescent HIV Prevention: A Review

Recent research has highlighted the signiﬁcant contribution families make in the prevention of HIV risk behaviors among adolescents. As the most proximal and fundamental social system inﬂuencing child development, families provide many of the factors that protect adolescents from engaging in sexual risk behaviors. Among these are positive family relations, effective communication about sexuality and safer sexual behaviors, enhancement and sup-port of academic functioning, and monitoring of peer activities. HIV risk behaviors occur in a social context, and it is becoming clear that the earliest and most effective way to intervene is in the context where one initially learns about relationships and behavior—the family. Both the Centers for Disease Control and Prevention and the National Institute for Mental Health have taken steps to support and emphasize research that will further elucidate our understanding of the role of families in HIV prevention. This article uses Ecodevelopmental Theory to guide and organize the ﬁndings of this promising research area. Within this context, and with special attention to the comorbidity of adolescent problem behaviors, this article reviews empirical research on the role of families in HIV prevention, discusses current intervention efforts that involve families and ecosystems, and addresses prospects and implications for future research and interventions.

HIV and AIDS have impacted on social relations in many ways, eroding personal networks, contributing to household poverty, and rupturing intimate relations. With the continuing transmission of HIV particularly in resource-poor settings, families and others must find new ways to care for those who are living with HIV, for those who are ill and need increased levels of personal and medical care, and for orphaned children. These needs occur concurrently with changes in familystructure, as a direct result of HIV-related deaths but also due to industrialization, urbanization, and labor migration. In this special issue, the contributing authors draw on ethnographies from South Africa, Swaziland, Lesotho, Zambia, and – by way of contrast – China, to illustrate how people find new ways of constituting families, or of providing alternatives to families, in order to provide care and support to people infected with and afflicted by HIV. 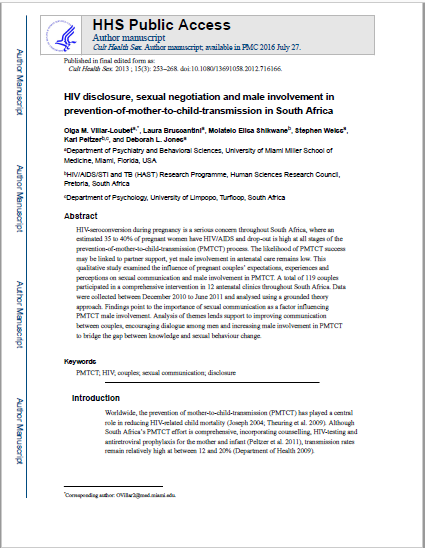 HIV-seroconversion during pregnancy is a serious concern throughout South Africa, where an estimated 35 to 40% of pregnant women have HIV/AIDS and drop-out is high at all stages of the prevention-of-mother-to-child-transmission (PMTCT) process. The likelihood of PMTCT success may be linked to partner support, yet male involvement in antenatal care remains low. This qualitative study examined the influence of pregnant couples’ expectations, experiences and perceptions on sexual communication and male involvement in PMTCT. A total of 119 couples participated in a comprehensive intervention in 12 antenatal clinics throughout South Africa. Data were collected between December 2010 to June 2011 and analysed using a grounded theory approach. Findings point to the importance of sexual communication as a factor influencing PMTCT male involvement. Analysis of themes lends support to improving communication between couples, encouraging dialogue among men and increasing male involvement in PMTCT to bridge the gap between knowledge and sexual behaviour change.