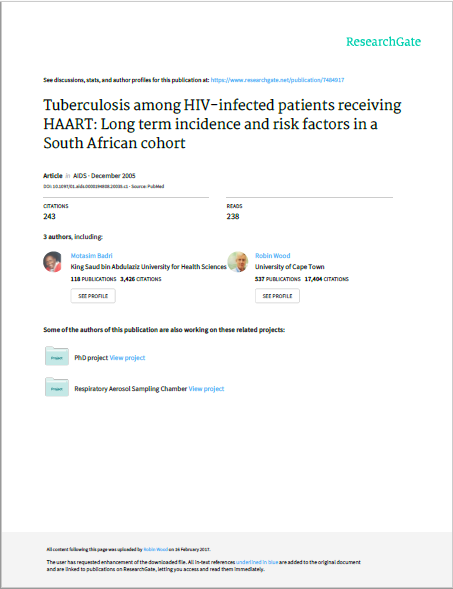 Objectives: To determine the long-term incidence of tuberculosis (TB) and associated risk factors among individuals receiving HAART in South Africa.
Design: Prospective cohort study.
Methods: Microbiologically or histologically conﬁrmed incident TB was identiﬁed in a hospital-based cohort of 346 patients receiving HAART between 1996 and 2005 in Cape Town.
Results: The TB incidence density rate was 3.5/100 person-years in the ﬁrst year and signiﬁcantly decreased during follow-up, reaching 1.01/100 person-years in the ﬁfth year (P ¼ 0.002 for trend). TB incidence during the study was highest among patients with baseline CD4 cell counts < 100 cells/ml and those with World Health Organization (WHO) clinical stage 3 or 4 disease (5.71 and 3.88/100 person-years, respectively). Risk of TB was independently associated with CD4 cell count < 100 cells/ml (adjusted risk ratio [ARR], 2.38; 95% conﬁdence interval (CI), 1.01–5.60; P ¼ 0.04), WHO stage 3 or 4 disease (ARR, 3.60; 95% CI, 1.32–9.80; P ¼ 0.01) and age < 33 years (ARR, 2.86; 95%CI, 1.29–6.34; P ¼ 0.01). Risk of TB was not independently associated with plasma viral load, previous history of TB, low socioeconomic status or sex. Despite similar virological responses to HAART, blood CD4 cell count increases were much smaller among patients who developed TB than among those who remained free of TB.
Conclusions: Incidence of TB continues to decrease during the ﬁrst 5 years of HAART and so HAART may contribute more to TB control in low-income countries than was previously estimated from short-term follow-up. Patients with advanced pretreatment immunodeﬁciency had persistently increased risk of TB during HAART; this may reﬂect limited capacity for immune restoration among such patients. 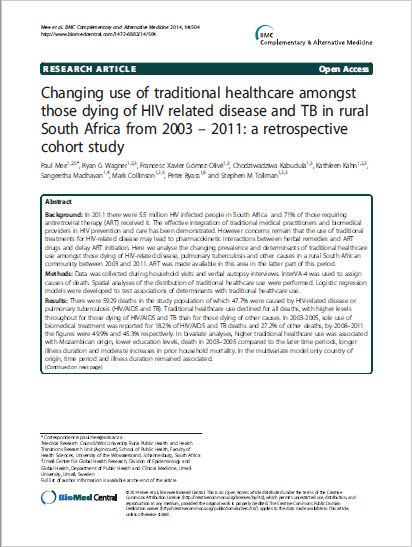 Changing use of traditional healthcare amongst those dying of HIV related disease and TB in rural South Africa from 2003 – 2011: a retrospective cohort study

Background: In 2011 there were 5.5 million HIV infected people in South Africa and 71% of those requiring antiretroviral therapy (ART) received it. The effective integration of traditional medical practitioners and biomedical providers in HIV prevention and care has been demonstrated. However concerns remain that the use of traditional treatments for HIV-related disease may lead to pharmacokinetic interactions between herbal remedies and ART drugs and delay ART initiation. Here we analyse the changing prevalence and determinants of traditional healthcare use amongst those dying of HIV-related disease, pulmonary tuberculosis and other causes in a rural South African community between 2003 and 2011. ART was made available in this area in the latter part of this period.
Methods: Data was collected during household visits and verbal autopsy interviews. InterVA-4 was used to assign causes of death. Spatial analyses of the distribution of traditional healthcare use were performed. Logistic regression models were developed to test associations of determinants with traditional healthcare use.
Results: There were 5929 deaths in the study population of which 47.7% were caused by HIV-related disease or pulmonary tuberculosis (HIV/AIDS and TB). Traditional healthcare use declined for all deaths, with higher levels throughout for those dying of HIV/AIDS and TB than for those dying of other causes. In 2003-2005, sole use of biomedical treatment was reported for 18.2% of HIV/AIDS and TB deaths and 27.2% of other deaths, by 2008–2011 the figures were 49.9% and 45.3% respectively. In bivariate analyses, higher traditional healthcare use was associated with Mozambican origin, lower education levels, death in 2003–2005 compared to the later time periods, longer illness duration and moderate increases in prior household mortality. In the multivariate model only country of origin, time period and illness duration remained associated. Conclusions: There were large decreases in reported traditional healthcare use and increases in the sole use of biomedical treatment amongst those dying of HIV/AIDS and TB. No associations between socio-economic position, age or gender and the likelihood of traditional healthcare use were seen. Further qualitative and quantitative studies are needed to assess whether these figures reflect trends in healthcare use amongst the entire population and the reasons for the temporal changes identified. 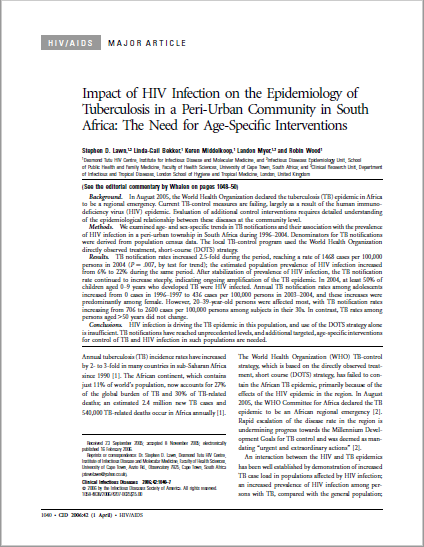 Impact of HIV Infection on the Epidemiology of Tuberculosis in a Peri-Urban Community in South Africa: The Need for Age-Speciﬁc Interventions

Background. In August 2005, the World Health Organization declared the tuberculosis (TB) epidemic in Africa to be a regional emergency. Current TB-control measures are failing, largely as a result of the human immunodeﬁciency virus (HIV) epidemic. Evaluation of additional control interventions requires detailed understanding of the epidemiological relationship between these diseases at the community level.
Methods. We examined age- and sex-speciﬁc trends in TB notiﬁcations and their association with the prevalence of HIV infection in a peri-urban township in South Africa during 1996–2004. Denominators for TB notiﬁcations were derived from population census data. The local TB-control program used the World Health Organization directly observed treatment, short-course (DOTS) strategy.
Results. TB notiﬁcation rates increased 2.5-fold during the period, reaching a rate of 1468 cases per 100,000 persons in 2004 (P p .007, by test for trend); the estimated population prevalence of HIV infection increased from 6% to 22% during the same period. After stabilization of prevalence of HIV infection, the TB notiﬁcation rate continued to increase steeply, indicating ongoing ampliﬁcation of the TB epidemic. In 2004, at least 50% of children aged 0–9 years who developed TB were HIV infected. Annual TB notiﬁcation rates among adolescents increased from 0 cases in 1996–1997 to 436 cases per 100,000 persons in 2003–2004, and these increases were predominantly among female. However, 20–39-year-old persons were affected most, with TB notiﬁcation rates increasing from 706 to 2600 cases per 100,000 persons among subjects in their 30s. In contrast, TB rates among persons aged 150 years did not change.
Conclusions. HIV infection is driving the TB epidemic in this population, and use of the DOTS strategy alone is insufﬁcient. TB notiﬁcations have reached unprecedented levels, and additional targeted, age-speciﬁc interventions for control of TB and HIV infection in such populations are needed. 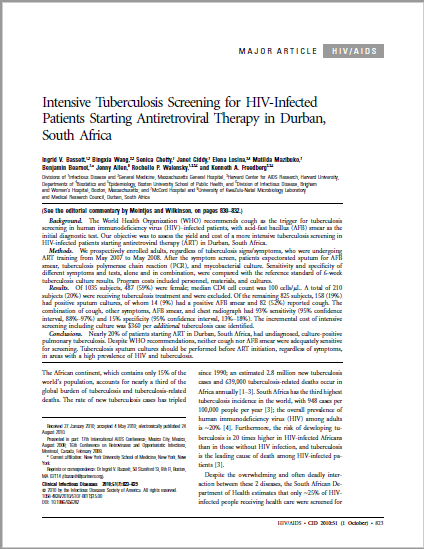 Background. The World Health Organization (WHO) recommends cough as the trigger for tuberculosis screening in human immunodeﬁciency virus (HIV)–infected patients, with acid-fast bacillus (AFB) smear as the initial diagnostic test. Our objective was to assess the yield and cost of a more intensive tuberculosis screening in HIV-infected patients starting antiretroviral therapy (ART) in Durban, South Africa.
Methods. We prospectively enrolled adults, regardless of tuberculosis signs/symptoms, who were undergoing ART training from May 2007 to May 2008. After the symptom screen, patients expectorated sputum for AFB smear, tuberculosis polymerase chain reaction (PCR), and mycobacterial culture. Sensitivity and speciﬁcity of different symptoms and tests, alone and in combination, were compared with the reference standard of 6-week tuberculosis culture results. Program costs included personnel, materials, and cultures.
Results. Of 1035 subjects, 487 (59%) were female; median CD4 cell count was 100 cells/mL. A total of 210 subjects (20%) were receiving tuberculosis treatment and were excluded. Of the remaining 825 subjects, 158 (19%) had positive sputum cultures, of whom 14 (9%) had a positive AFB smear and 82 (52%) reported cough. The combination of cough, other symptoms, AFB smear, and chest radiograph had 93% sensitivity (95% conﬁdence interval, 88%–97%) and 15% speciﬁcity (95% conﬁdence interval, 13%–18%). The incremental cost of intensive screening including culture was $360 per additional tuberculosis case identiﬁed.
Conclusions. Nearly 20% of patients starting ART in Durban, South Africa, had undiagnosed, culture-positive pulmonary tuberculosis. Despite WHO recommendations, neither cough nor AFB smear were adequately sensitive for screening. Tuberculosis sputum cultures should be performed before ART initiation, regardless of symptoms, in areas with a high prevalence of HIV and tuberculosis. 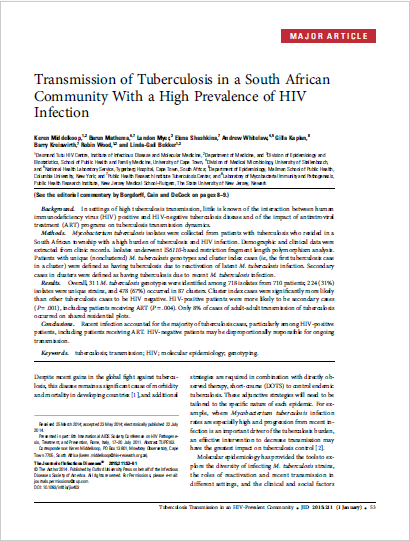