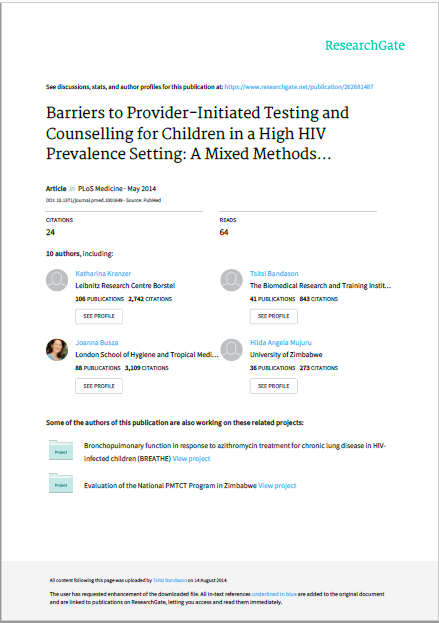 Barriers to Provider-Initiated Testing and Counselling for Children in a High HIV Prevalence Setting: A Mixed Methods…

Background: There is a substantial burden of HIV infection among older children in sub-Saharan Africa, the majority of whom are diagnosed after presentation with advanced disease. We investigated the provision and uptake of provider-initiated HIV testing and counselling (PITC) among children in primary health care facilities, and explored health care worker (HCW) perspectives on providing HIV testing to children.
Methods and Findings: Children aged 6 to 15 y attending six primary care clinics in Harare, Zimbabwe, were offered PITC, with guardian consent and child assent. The reasons why testing did not occur in eligible children were recorded, and factors associated with HCWs offering and children/guardians refusing HIV testing were investigated using multivariable logistic regression. Semi-structured interviews were conducted with clinic nurses and counsellors to explore these factors. Among 2,831 eligible children, 2,151 (76%) were offered PITC, of whom 1,534 (54.2%) consented to HIV testing. The main reasons HCWs gave for not offering PITC were the perceived unsuitability of the accompanying guardian to provide consent for HIV testing on behalf of the child and lack of availability of staff or HIV testing kits. Children who were asymptomatic, older, or attending with a male or a younger guardian had significantly lower odds of being offered HIV testing. Male guardians were less likely to consent to their child being tested. 82 (5.3%) children tested HIV-positive, with 95% linking to care. Of the 940 guardians who tested with the child, 186 (19.8%) were HIV-positive.
Conclusions: The HIV prevalence among children tested was high, highlighting the need for PITC. For PITC to be successfully implemented, clear legislation about consent and guardianship needs to be developed, and structural issues addressed. HCWs require training on counselling children and guardians, particularly male guardians, who are less likely to engage with health care services. Increased awareness of the risk of HIV infection in asymptomatic older children is needed. 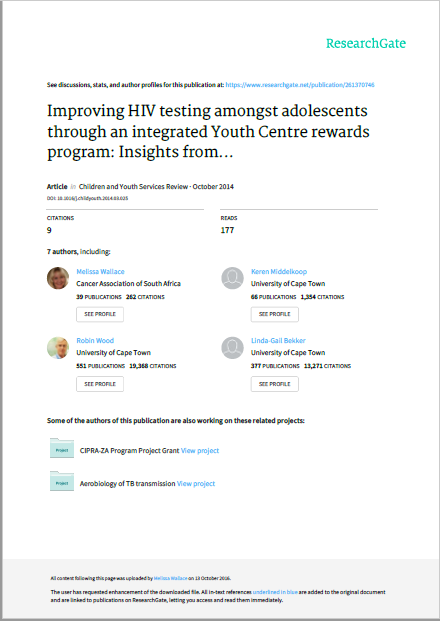 Despite high HIV prevalence the uptake of HIV counseling and testing (HCT) has been low in South African adolescents, in particular among boys. We designed and implemented an integrated Youth Centre (YC), which included a health clinic and a points based rewards program to incentivize YC services, adjacent to a periurban community in Cape Town. We compared 12 month age and gender speciﬁc HCT rates for 12–22 year olds between the YC and the single local community clinic in the adjacent community prospectively and for the 12 months prior to YC implementation. Local clinic data were collected through the HCT register. At the YC demographic, attendance, incentives and HIV testing data were prospectively collected via a biometric data collection system. 1187 12–22 year olds attended the YC in the 12 month period. Within the 12–15 year old age group, 12.7% more individuals tested at the YC compared to the clinic in 2011–2012; this difference was greater in males than females. In the 16–22 year category, signiﬁcantly more individuals tested at the clinic compared to the YC. The use of the YC reward program was associated with undergoing an HIV test. Understanding the speciﬁc programmatic factors that led to increased testing behaviour including the role of incentives at the YC warrants further attention. 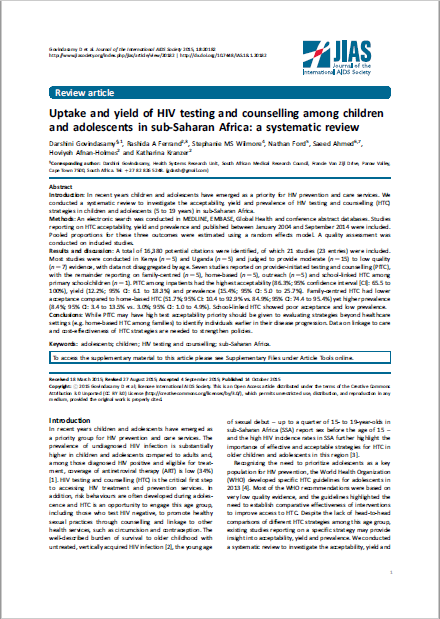 Uptake and yield of HIV testing and counselling among children and adolescents in sub-Saharan Africa: a systematic review

Introduction: In recent years children and adolescents have emerged as a priority for HIV prevention and care services. We conducted a systematic review to investigate the acceptability, yield and prevalence of HIV testing and counselling (HTC) strategies in children and adolescents (5 to 19 years) in sub-Saharan Africa.
Methods: An electronic search was conducted in MEDLINE, EMBASE, Global Health and conference abstract databases. Studies reporting on HTC acceptability, yield and prevalence and published between January 2004 and September 2014 were included. Pooled proportions for these three outcomes were estimated using a random effects model. A quality assessment was conducted on included studies. 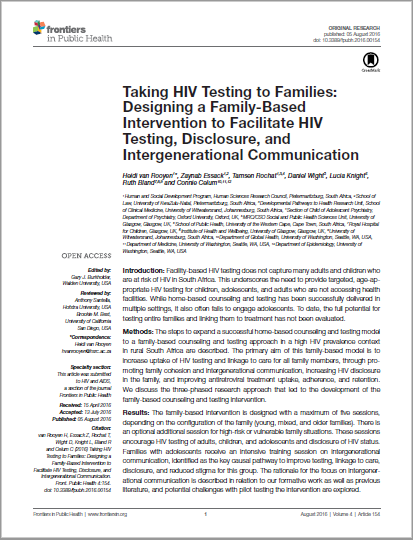 In many contexts, voluntary counseling and testing services are predominantly accessed at health-care facilities (facility-based HIV testing). However, facility-based HIV testing does not reach many adults and children (under 18 years) who are at risk of HIV in South Africa (1–5). Most adult women test through antenatal or postnatal care, but many women who are not of reproductive age, older people with high HIV prevalence (9.5%) (6–8), and men are missed by facility-based approaches. Furthermore, the children of HIV-positive women are not routinely tested through prevention of mother-to-child transmission programs (9). Despite high HIV prevalence, adolescent (defined by WHO as 10–19 years) (10) rates of testing are particularly low within facilities (11). These missed testing opportunities underscore the need to increase options to provide targeted, age-appropriate HIV testing for children and adolescents and to create opportunities for adults not accessing facility-based services to learn their serostatus. 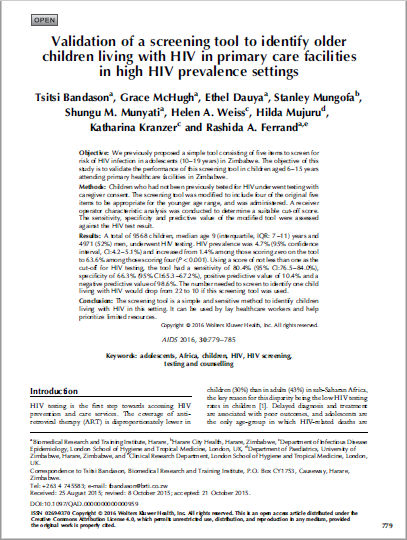 Objective: We previously proposed a simple tool consisting of ﬁve items to screen for risk of HIV infection in adolescents (10–19 years) in Zimbabwe. The objective of this study is to validate the performance of this screening tool in children aged 6–15 years attending primary healthcare facilities in Zimbabwe.
Methods: Children who had not been previously tested for HIV underwent testing with caregiver consent. The screening tool was modiﬁed to include four of the original ﬁve items to be appropriate for the younger age range, and was administered. A receiver operator characteristic analysis was conducted to determine a suitable cut-off score. The sensitivity, speciﬁcity and predictive value of the modiﬁed tool were assessed against the HIV test result.
Results: A total of 9568 children, median age 9 (interquartile, IQR: 7–11) years and 4971 (52%) men, underwent HIV testing. HIV prevalence was 4.7% (95% conﬁdence interval, CI:4.2–5.1%) and increased from 1.4% among those scoring zero on the tool to 63.6% among those scoring four (P < 0.001). Using a score of not less than one as the cut-off for HIV testing, the tool had a sensitivity of 80.4% (95% CI:76.5–84.0%), speciﬁcity of 66.3% (95% CI:65.3–67.2%), positive predictive value of 10.4% and a negative predictive value of 98.6%. The number needed to screen to identify one child living with HIV would drop from 22 to 10 if this screening tool was used.
Conclusion: The screening tool is a simple and sensitive method to identify children living with HIV in this setting. It can be used by lay healthcare workers and help prioritize limited resources.