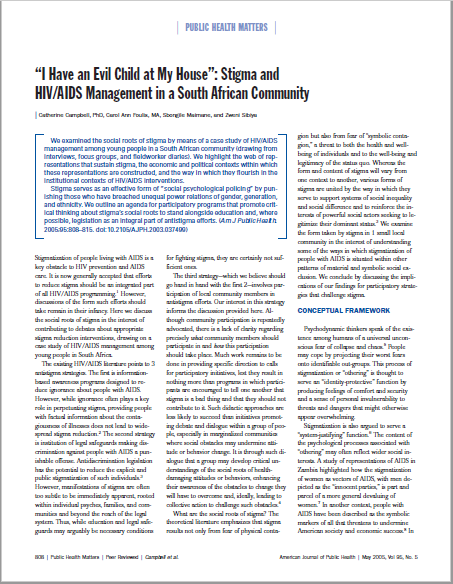 “I Have an Evil Child at My House”: Stigma and HIV/AIDS Management in a South African Community

We examined the social roots of stigma by means of a case study of HIV/AIDS management among young people in a South African community (drawing from interviews, focus groups, and fieldworker diaries). We highlight the web of representations that sustain stigma, the economic and political contexts within which these representations are constructed, and the way in which they flourish in the institutional contexts of HIV/AIDS interventions.
Stigma serves as an effective form of “social psychological policing” by punishing those who have breached unequal power relations of gender, generation, and ethnicity. We outline an agenda for participatory programs that promote critical thinking about stigma’s social roots to stand alongside education and, where possible, legislation as an integral part of antistigma efforts. 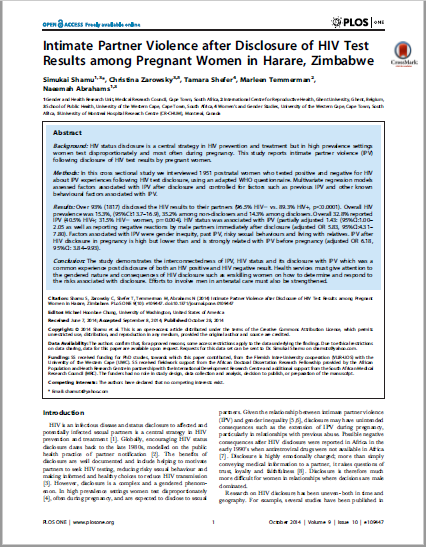 Background: HIV status disclosure is a central strategy in HIV prevention and treatment but in high prevalence settings women test disproportionately and most often during pregnancy. This study reports intimate partner violence (IPV) following disclosure of HIV test results by pregnant women.
Methods: In this cross sectional study we interviewed 1951 postnatal women who tested positive and negative for HIV about IPV experiences following HIV test disclosure, using an adapted WHO questionnaire. Multivariate regression models assessed factors associated with IPV after disclosure and controlled for factors such as previous IPV and other known behavioural factors associated with IPV.
Results: Over 93% (1817) disclosed the HIV results to their partners (96.5% HIV2 vs. 89.3% HIV+,p,0.0001). Overall HIV prevalence was 15.3%, (95%CI:13.7–16.9), 35.2% among non-disclosers and 14.3% among disclosers. Overall 32.8% reported IPV (40.5% HIV+; 31.5% HIV2 women, p = 0.004). HIV status was associated with IPV (partially adjusted 1.43: (95%CI:1.00–2.05 as well as reporting negative reactions by male partners immediately after disclosure (adjusted OR 5.83, 95%CI:4.31–7.80). Factors associated with IPV were gender inequity, past IPV, risky sexual behaviours and living with relatives. IPV after HIV disclosure in pregnancy is high but lower than and is strongly related with IPV before pregnancy (adjusted OR 6.18, 95%CI: 3.84–9.93).
Conclusion: The study demonstrates the interconnectedness of IPV, HIV status and its disclosure with IPV which was a common experience post disclosure of both an HIV positive and HIV negative result. Health services must give attention to the gendered nature and consequences of HIV disclosure such as enskilling women on how to determine and respond to the risks associated with disclosure. Efforts to involve men in antenatal care must also be strengthened.

Living with HIV, disclosure patterns and partnerships a decade after the introduction of HIV programmes in rural South Africa

Prevention of mother-to-child Transmission and HIV Treatment programmes were scaled-up in resource-constrained settings over a decade ago, but there is still much to be understood about women’s experiences of living with HIV and their HIV disclosure patterns. This qualitative study explored women’s experiences of living with HIV, 6–10 years after being diagnosed during pregnancy. The area has high HIV prevalence, and an established HIV treatment programme. Participants
were enrolled in a larger intervention, “Amagugu”, that supported women (n = 281) to disclose their HIV status to their children. Post-intervention we conducted individual in-depth interviews with 20 randomly selected women, stratified by clinic catchment area, from the total sample. Interviews were entered into ATLAS.ti computer software for coding. Most women were living with their current sexual partner and half were still in a relationship with the child’sbiological father.
Household exposure to HIV was high with the majority of women knowing at least one other HIV-infected adult in their household. Eighteen women had disclosed their HIV status to another person; nine had disclosed to their current partner first. Two main themes were identified in the analyses: living with HIV and the normalisation of HIV treatment at a family level; and the complexity of love relationships, in particular in long-term partnerships. A decade on, most women were living positively with HIV, accessing care, and reported experiencing little stigma. However, as HIV became normalised new
challenges arose including concerns about access to quality care, and the need for family-centred care. Women’s sexual choices and relationships were intertwined with feelings of love, loyalty and trust and the important supportive role played by partners and families was acknowledged, however, some aspects of living with HIV presented challenges including continuing to practice safe sex several years after HIV diagnosis.