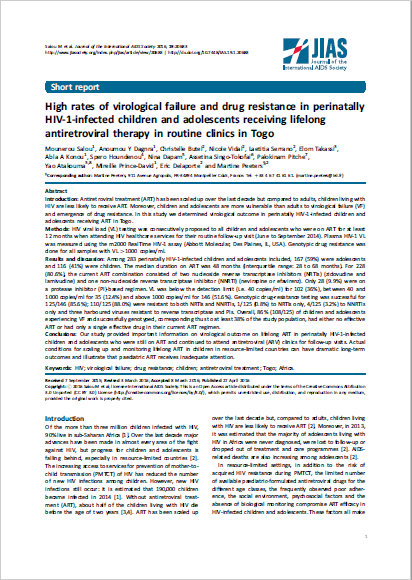 Introduction: Antiretroviral treatment (ART) has been scaled up over the last decade but compared to adults, children living with HIV are less likely to receive ART. Moreover, children and adolescents are more vulnerable than adults to virological failure (VF) and emergence of drug resistance. In this study we determined virological outcome in perinatally HIV-1-infected children and adolescents receiving ART in Togo.
Methods: HIV viral load (VL) testing was consecutively proposed to all children and adolescents who were on ART for at least 12 months when attending HIV healthcare services for their routine follow-up visit (June to September 2014). Plasma HIV-1 VL was measured using the m2000 RealTime HIV-1 assay (Abbott Molecular, Des Plaines, IL, USA). Genotypic drug resistance was
done for all samples with VL>1000 copies/ml. 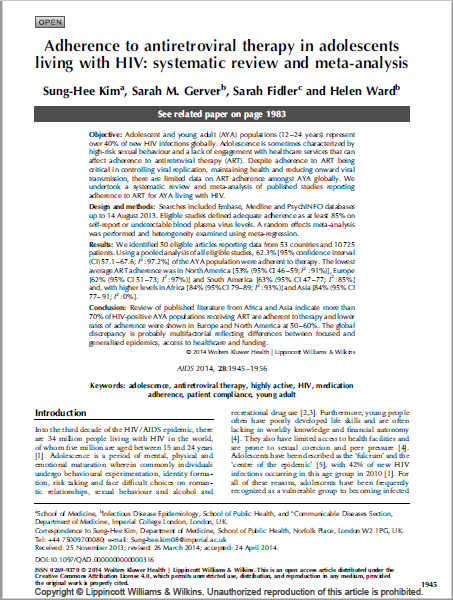 Adherence to antiretroviral therapy in adolescents living with HIV: systematic review and meta-analysis

Objective: Adolescent and young adult (AYA) populations (12–24 years) represent over 40% of new HIV infections globally. Adolescence is sometimes characterized by high-risk sexual behaviour and a lack of engagement with healthcare services that can affect adherence to antiretroviral therapy (ART). Despite adherence to ART being critical in controlling viral replication, maintaining health and reducing onward viral transmission, there are limited data on ART adherence amongst AYA globally. We undertook a systematic review and meta-analysis of published studies reporting adherence to ART for AYA living with HIV.
Design and methods: Searches included Embase, Medline and PsychINFO databases up to 14 August 2013. Eligible studies deﬁned adequate adherence as at least 85% on self-report or undetectable blood plasma virus levels. A random effects meta-analysis was performed and heterogeneity examined using meta-regression.
Download pdf (111 downloads)

Background: Very few data are available on treatment outcomes of adolescents living with HIV infection (whether perinatally acquired or sexually acquired) in sub-Saharan Africa. The present study therefore compared the treatment outcomes in adolescents with those of young adults at a public sector community-based ART programme in Cape Town, South Africa.
Methods: Treatment outcomes of adolescents (9-19 years) were compared with those of young adults (20-28 years), enrolled in a prospective cohort between September 2002 and June 2009. Kaplan-Meier estimates and Cox proportional hazard models were used to assess outcomes and determine associations with age, while adjusting for potential confounders. The treatment outcomes were mortality, loss to follow-up (LTFU), immunological response, virological suppression and virological failure.
Results: 883 patients, including 65 adolescents (47 perinatally infected and 17 sexually infected) and 818 young adults, received ART. There was no difference in median baseline CD4 cell count between adolescents and young adults (133.5 vs 116 cells/μL; p = 0.31). Overall mortality rates in adolescents and young adults were 1.2 (0.3-4.8) and 3.1 (2.4-3.9) deaths per 100 person-years, respectively. Adolescents had lower rates of virological suppression (< 400 copies/mL) at 48 weeks (27.3% vs 63.1%; p < 0.001). Despite this, however, the median change in CD4 count from baseline at 48 weeks of ART was significantly greater for adolescents than young adults (373 vs 187 cells/μL; p = 0.0001). Treatment failure rates were 8.2 (4.6-14.4) and 5.0 (4.1-6.1) per 100 person-years in the two groups. In multivariate analyses, there was no significant difference in LTFU and mortality between age groups but increased risk in virological failure [AHR 2.06 (95% CI 1.11-3.81; p = 0.002)] in adolescents.
Conclusions: Despite lower virological suppression rates and higher rates of virological failure, immunological responses were nevertheless greater in adolescents than young adults whereas rates of mortality and LTFU were similar. Further studies to determine the reasons for poorer virological outcomes are needed. 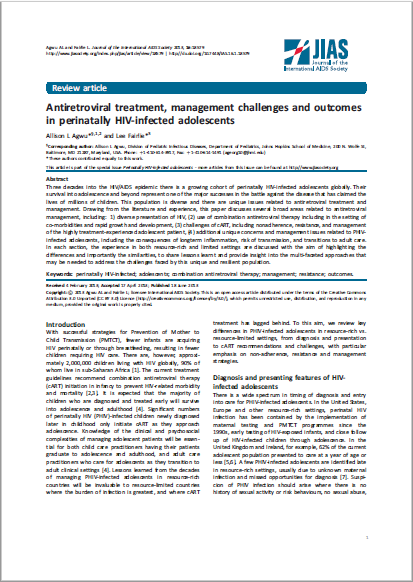 Three decades into the HIV/AIDS epidemic there is a growing cohort of perinatally HIV-infected adolescents globally. Their survival into adolescence and beyond represent one of the major successes in the battle against the disease that has claimed the lives of millions of children. This population is diverse and there are unique issues related to antiretroviral treatment and management. Drawing from the literature and experience, this paper discusses several broad areas related to antiretroviral management, including: 1) diverse presentation of HIV, (2) use of combination antiretroviral therapy including in the setting of co-morbidities and rapid growth and development, (3) challenges of cART, including nonadherence, resistance, and management of the highly treatment-experienced adolescent patient, (4) additional unique concerns and management issues related to PHIV-infected adolescents, including the consequences of longterm inflammation, risk of transmission, and transitions to adult care. In each section, the experience in both resource-rich and limited settings are discussed with the aim of highlighting the differences and importantly the similarities, to share lessons learnt and provide insight into the multi-faceted approaches that may be needed to address the challenges faced by this unique and resilient population. 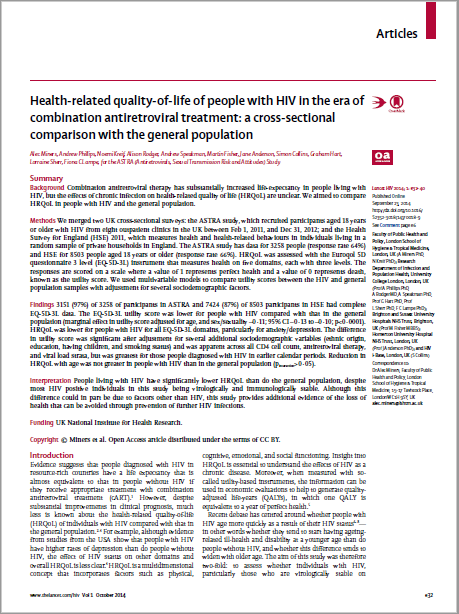 Health-related quality-of-life of people with HIV in the era of combination antiretroviral treatment: a cross-sectional comparison with the general population

Background: Combination antiretroviral therapy has substantially increased life-expectancy in people living with HIV, but the eﬀ ects of chronic infection on health-related quality of life (HRQoL) are unclear. We aimed to compare HRQoL in people with HIV and the general population.
Methods: We merged two UK cross-sectional surveys: the ASTRA study, which recruited participants aged 18 years or older with HIV from eight outpatient clinics in the UK between Feb 1, 2011, and Dec 31, 2012; and the Health Survey for England (HSE) 2011, which measures health and health-related behaviours in individuals living in a random sample of private households in England. The ASTRA study has data for 3258 people (response rate 64%) and HSE for 8503 people aged 18 years or older (response rate 66%). HRQoL was assessed with the Euroqol 5D questionnaire 3 level (EQ-5D-3L) instrument that measures health on ﬁ ve domains, each with three levels. The responses are scored on a scale where a value of 1 represents perfect health and a value of 0 represents death, known as the utility score. We used multivariable models to compare utility scores between the HIV and general population samples with adjustment for several sociodemographic factors.
Findings: 3151 (97%) of 3258 of participants in ASTRA and 7424 (87%) of 8503 participants in HSE had complete EQ-5D-3L data. The EQ-5D-3L utility score was lower for people with HIV compared with that in the general population (marginal eﬀ ect in utility score adjusted for age, and sex/sexuality –0·11; 95% CI –0·13 to –0·10; p<0·0001). HRQoL was lower for people with HIV for all EQ-5D-3L domains, particularly for anxiety/depression. The diﬀ erence in utility score was signiﬁ cant after adjustment for several additional sociodemographic variables (ethnic origin, education, having children, and smoking status) and was apparent across all CD4 cell count, antiretroviral therapy, and viral load strata, but was greatest for those people diagnosed with HIV in earlier calendar periods. Reduction in HRQoL with age was not greater in people with HIV than in the general population (pinteraction>0·05).
Interpretation: People living with HIV have signiﬁ cantly lower HRQoL than do the general population, despite most HIV positive individuals in this study being virologically and immunologically stable. Although this diﬀ erence could in part be due to factors other than HIV, this study provides additional evidence of the loss of health that can be avoided through prevention of further HIV infections.