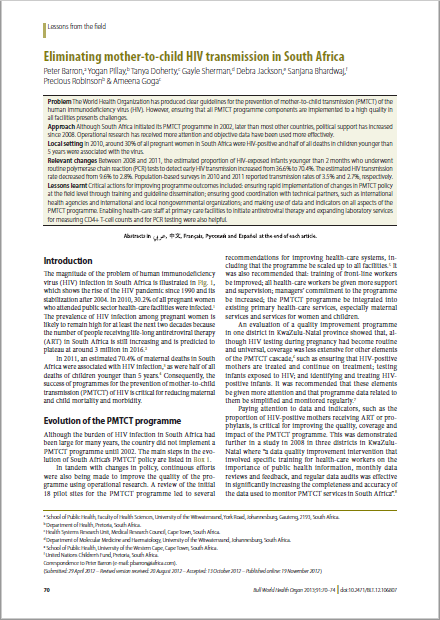 Problem The World Health Organization has produced clear guidelines for the prevention of mother-to-child transmission (PMTCT) of the human immunodeficiency virus (HIV). However, ensuring that all PMTCT programme components are implemented to a high quality in all facilities presents challenges.
Approach Although South Africa initiated its PMTCT programme in 2002, later than most other countries, political support has increased since 2008. Operational research has received more attention and objective data have been used more effectively.
Local setting In 2010, around 30% of all pregnant women in South Africa were HIV-positive and half of all deaths in children younger than 5 years were associated with the virus.
Relevant changes Between 2008 and 2011, the estimated proportion of HIV-exposed infants younger than 2 months who underwent routine polymerase chain reaction (PCR) tests to detect early HIV transmission increased from 36.6% to 70.4%. The estimated HIV transmission rate decreased from 9.6% to 2.8%. Population-based surveys in 2010 and 2011 reported transmission rates of 3.5% and 2.7%, respectively. Lessons learnt Critical actions for improving programme outcomes included: ensuring rapid implementation of changes in PMTCT policy at the field level through training and guideline dissemination; ensuring good coordination with technical partners, such as international health agencies and international and local nongovernmental organizations; and making use of data and indicators on all aspects of the PMTCT programme. Enabling health-care staff at primary care facilities to initiate antiretroviral therapy and expanding laboratory services for measuring CD4+ T-cell counts and for PCR testing were also helpful. 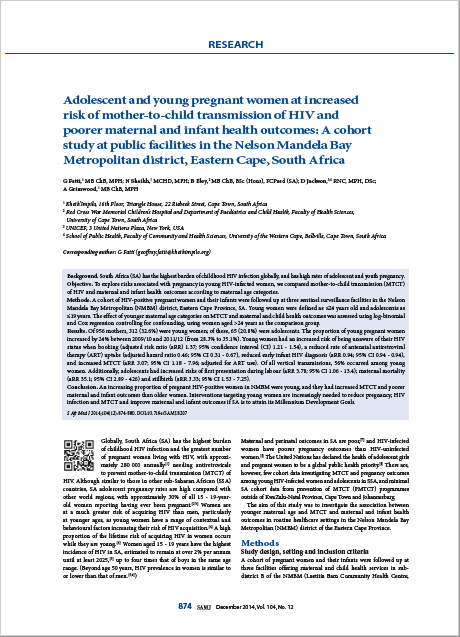 Background. South Africa (SA) has the highest burden of childhood HIV infection globally, and has high rates of adolescent and youth pregnancy. Objective. To explore risks associated with pregnancy in young HIV-­infected women, we compared mother-­to-­child transmission (MTCT) of HIV and maternal and infant health outcomes according to maternal age categories.

Background: There is a paucity of data on the national population-level effectiveness of preventing mother-to-child transmission (PMTCT) programmes in high-HIV-prevalence, resource-limited settings. We assessed national PMTCT impact in South Africa (SA), 2010. 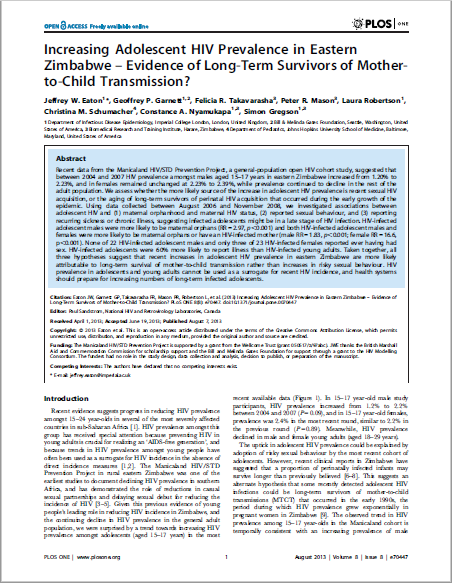 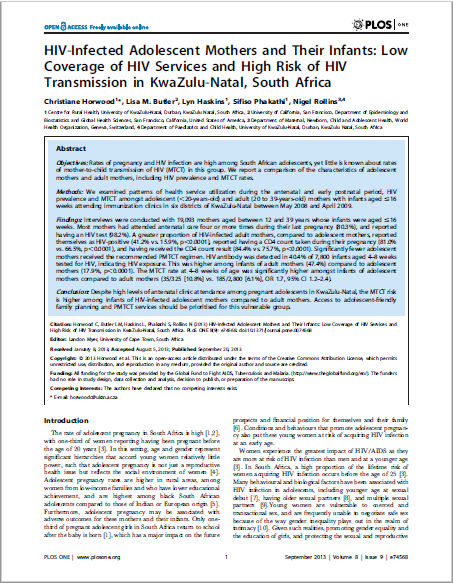 Objectives: Rates of pregnancy and HIV infection are high among South African adolescents, yet little is known about rates of mother-to-child transmission of HIV (MTCT) in this group. We report a comparison of the characteristics of adolescent mothers and adult mothers, including HIV prevalence and MTCT rates.