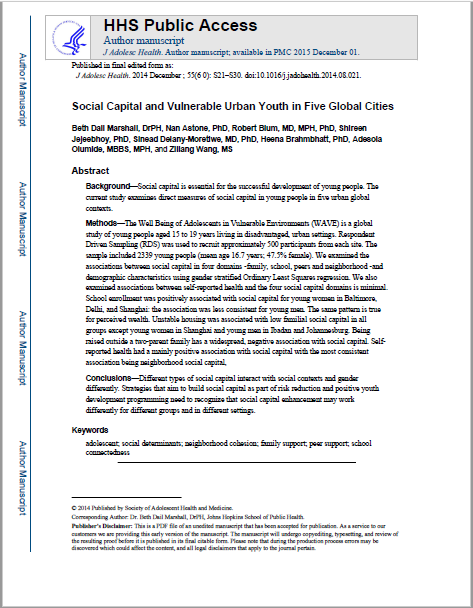 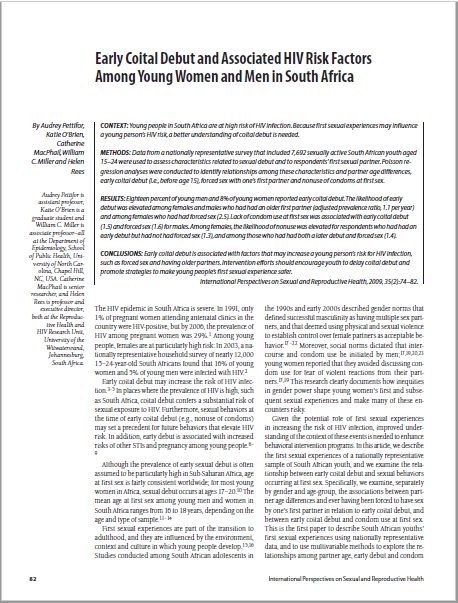 CONTEXT: Young people in South Africa are at high risk of HIV infection. Because first sexual experiences may influence a young person’s HIV risk, a better understanding of coital debut is needed.

CONCLUSIONS: Early coital debut is associated with factors that may increase a young person’s risk for HIV infection, such as forced sex and having older partners. Intervention efforts should encourage youth to delay coital debut and promote strategies to make young people’s first sexual experience safer. 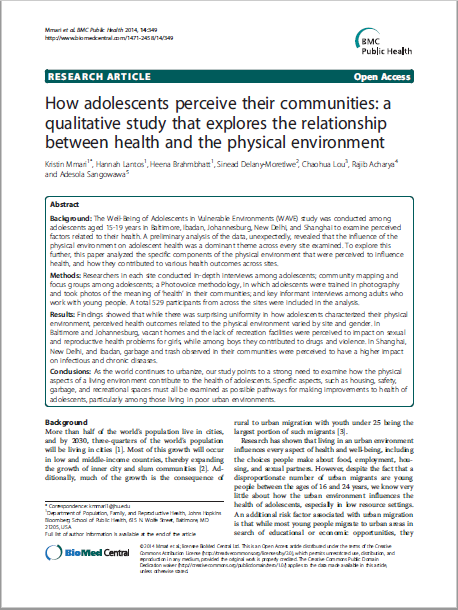 How adolescents perceive their communities: a qualitative study that explores the relationship between health and the physical environment

Background: The Well-Being of Adolescents in Vulnerable Environments (WAVE) study was conducted among adolescents aged 15-19 years in Baltimore, Ibadan, Johannesburg, New Delhi, and Shanghai to examine perceived factors related to their health. A preliminary analysis of the data, unexpectedly, revealed that the influence of the physical environment on adolescent health was a dominant theme across every site examined. To explore this further, this paper analyzed the specific components of the physical environment that were perceived to influence health, and how they contributed to various health outcomes across sites.
Methods: Researchers in each site conducted in-depth interviews among adolescents; community mapping and focus groups among adolescents; a Photovoice methodology, in which adolescents were trained in photography and took photos of the meaning of ‘health’ in their communities; and key informant interviews among adults who work with young people. A total 529 participants from across the sites were included in the analysis.
Results: Findings showed that while there was surprising uniformity in how adolescents characterized their physical environment, perceived health outcomes related to the physical environment varied by site and gender. In Baltimore and Johannesburg, vacant homes and the lack of recreation facilities were perceived to impact on sexual and reproductive health problems for girls, while among boys they contributed to drugs and violence. In Shanghai, New Delhi, and Ibadan, garbage and trash observed in their communities were perceived to have a higher impact on infectious and chronic diseases.
Conclusions: As the world continues to urbanize, our study points to a strong need to examine how the physical aspects of a living environment contribute to the health of adolescents. Specific aspects, such as housing, safety, garbage, and recreational spaces must all be examined as possible pathways for making improvements to health of adolescents, particularly among those living in poor urban environments. 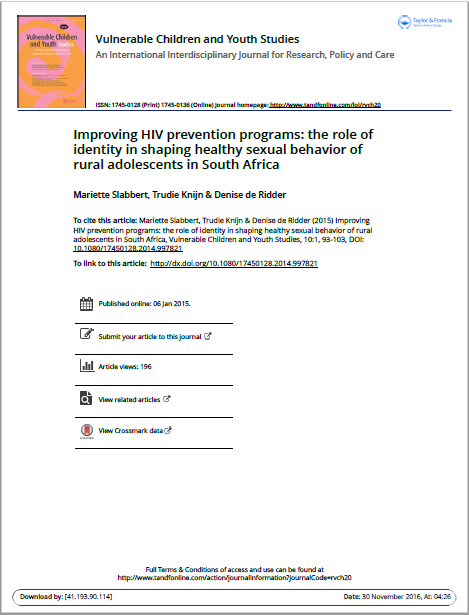 A large body of literature highlights the role of culture and identity in how individuals manage and maintain health. Disappointingly there was no statistically significant decline in HIV prevalence in the 15–24 years age group in South Africa since 2007, Millennium Development Goal 6 indicator. This warrants a new approach to youth HIV prevention, which considers identity and culture, in male-dominant environments. We used identity-based motivation theory, which predicts that possible identities have a crucial influence on health-promoting behavior, to argue that girls are not currently attaining their low risk possible identities because socio-cultural factors influence their behavior and compromise their health and economic outcomes. This study employed a cross-sectional survey among 285 rural black South African adolescents (mean age 16.7 years; 48.8% boys) to determine the salient social identity and the associated possible identities. We then tested whether youth behave in accordance with their possible identities. The dependent variables are non-risky behavior, risky behavior, and confidence to discuss sex. The independent variables are age, previous sex experience, and poverty. The adolescents chose gender as the most prominent social identity. Girls chose a safer possible identity than boys did, and girls do not actualize their possible identities while boys do. For girls, no dependent variables were significant. These results show that socio-cultural barriers prevent the girls from actualizing their non-risky possible identity. Future adolescent HIV prevention programs aimed at reducing HIV should promote rights and responsibilities and consider cultural norms and beliefs to create a more gender-equal society that embraces less risky sexual behavior, in line with the idealized identity of girls. This to convince both male and female adolescents of the benefits, risks, and social harms embedded in certain traditional practices in a high HIV-prevalent environment.

A tale of two countries: Rethinking sexual risk for HIV among young people in South Africa and the United States

Purpose—To compare the sexual behaviors of young people in South Africa (SA) and the United States (US) with the aim of better understanding the potential role of sexual behavior in HIV transmission in two countries with strikingly different HIV epidemics.
Methods—Nationally representative, population-based surveys of young people ages 18-24 from SA (n=7,548) and the US (n=13,451) were used.
Results—The prevalence of HIV was 10.2% in SA and <1% in the US. Young women and men in the US reported an earlier age of first sex than those in SA (mean age of coital debut for females: US (16.5), SA (17.4); for males: US (16.4), SA (16.7)). The median number of lifetime partners is higher in the US than in SA: Females: US (4), SA (2); Males US (4), SA (3). Reported condom use at last sex is lower in the US than SA: Females: US (36.1%), SA (45.4%); Males: US (48%), SA (58%). On average, SA young women report greater age differences with their sex partners than young women in the US.
Conclusions—Young people in the US report riskier sexual behaviors than young people in SA, despite the much higher prevalence of HIV infection in South Africa. Factors above and beyond sexual behavior likely play a key role in the ongoing transmission of HIV in South African youth, and must be urgently uncovered to develop maximally effective prevention strategies.